All NewsBusiness, Financial & LegalCases, Cooling & PSUContests & GiveawaysCPU, APU & ChipsetsDealsDisplays & ProjectorsGamingMotherboardsScience, Space & RoboticsStorageVideo CardsVirtual & Augmented Reality
All ReviewsAll ArticlesAudio, Sound & SpeakersCases, Cooling & PSUCPUs, Chipsets & SoCsComputer SystemsDisplays & ProjectorsGamingMotherboardsNetworkingPeripheralsRAMStorageVideo Cards
GuidesGamingAsk the ExpertsNewsletterAboutForums
RTX 3090 TiRTX 4090Diablo 2GTA 6Halo InfiniteElon MuskRTX 3080HDMI 2.1
Following on from some specs and images of NVIDIA's upcoming single-cored 9800GTX graphics card to have surfaced on the web a short while ago, a 3DMark06 run has since been performed with an early sample of the card by the folks over at Expreview. 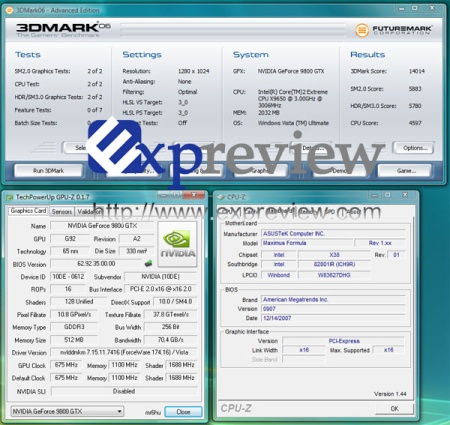 The result doesn't look to be all that spectacular at 14014 3DMarks in line of what we've seen from existing singular GPU graphics cards on the market. The run was performed with a system comprising a Core 2 Extreme @ 3GHz and 2GB of DDR2 memory running on ASUS' Maximus Formula X38 motherboard. The 9800GTX's clockspeeds were at 675/1688/1100MHz.

We can only hope the premature driver support for this card is the main reason for the unimpressive result.
Newsletter Subscription