On November 16, Elon Musk tweeted that "Blue Verified," or Twitter Blue needed to be relaunched following the rocky start to the company's newly revised subscription service. 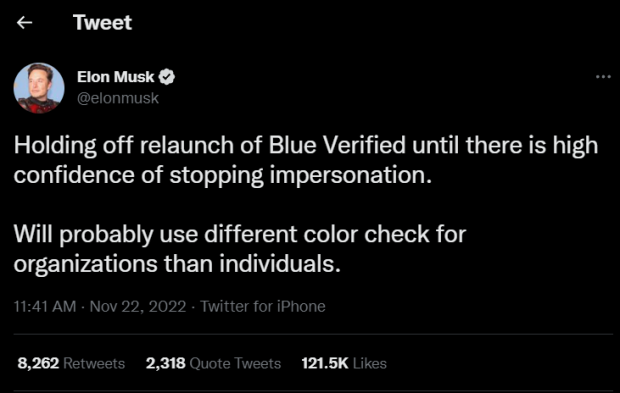 On the very first day of Twitter Blue being available to users, the social media platform experienced a massive influx of account impersonators that created new fake profiles of individuals/companies. This wave of impersonators with newly purchased check marks caused many problems for individuals and companies, as some individuals impersonated Twitter's own Twitter account, writing that Twitter Blue was "free" to cryptocurrency and NFT holders that "authenticated" their digital wallet via the included link. This illegitimate post sadly wasn't removed until it already had more than 30,000 retweets.

Musk wrote that Blue Verified would relaunch on November 29. However, the Tesla CEO has now said that the company will be "holding off" on the relaunch of "Blue Verified" until it has "high confidence" it can stop impersonation across the platform. Musk added that Twitter will likely use a different color checkmark for organizations and individuals. An example of this would be NASA having a different colored checkmark than Lebron James, who's a public figure.

The debacle of Twitter Blue originally began on November 5 when several celebrity accounts, such as comedian Kathy Griffin changed her display name/picture to what Elon Musk's account was using - a move that was done to illustrate that Musk's new "verification" system wasn't necessarily working as intended.

This move by Griffin and others sparked a wave of Musk impersonation accounts, which sparked a reply from the Twitter owner on November 6 when he announced that any accounts found impersonating another account without clearly having "parody" in their name would be permanently suspended without warning.

In other Elon Musk-Twitter news, the SpaceX and Tesla CEO recently closed Twitter offices in the wake of his not-so-well-received email that required Twitter staff to agree to work longer hours at an increased quality. If staff didn't agree to Musk's newly implemented policies by clicking the link provided in the company-wide email that was sent out, they would be given three months severance. If you are interested in reading more about that story or any others about Elon Musk and Twitter, check out the above and below links.