On November 16, Elon Musk sent out a company-wide email that outlined what he called "Twitter 2.0" and the new requirements staff would need to agree to for their position to remain at the company. 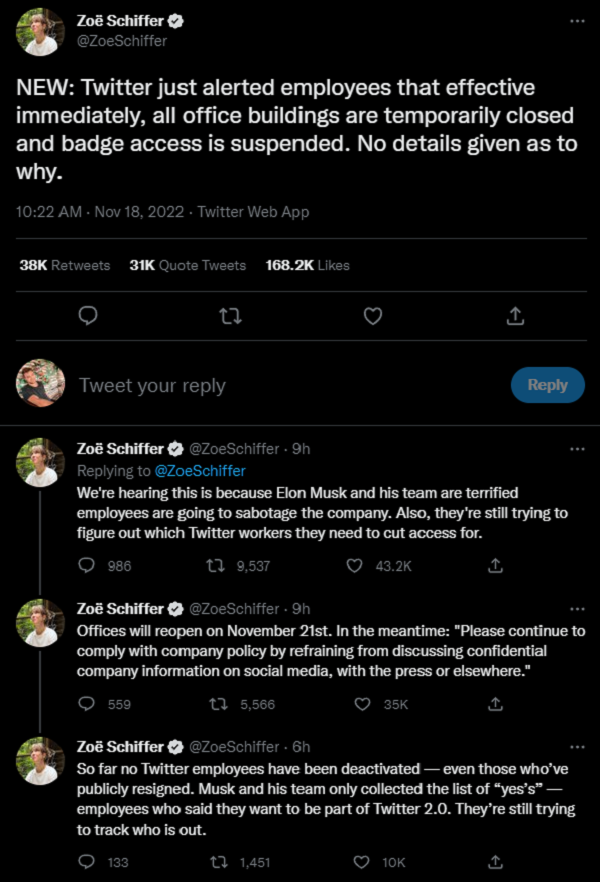 Musk titled the email "A Fork in the Road" and stated that for Twitter to breakthrough into "Twitter 2.0" and succeed against its competitors as well as in the wider world, all staff would need to work long hours at "high-intensity". Adding that the company would only be accepting "exceptional performance" as a passing grade.

Furthermore, Musk's email stated that Twitter would be shifting to a more engineer-focused mindset and that engineers who are able to write "great code" will comprise the majority of the team while also having the biggest sway when it comes to decisions. Musk's new list didn't stop there, as the Twitter owner stated at the bottom of the email that all staff who don't agree to these new standards by clicking the link provided in the email will receive their three-month severance.

The decision between working longer hours more intensely and being fired weighed on all Twitter employees between receiving the email on November 16 and 5 pm Thursday, the following day. Now, reports are coming out that Musk has abruptly shut down Twitter offices, with company officials informing staff that offices are temporarily closed until Monday. Insider reports speaking to a current employee that claimed the locking of the offices was done to "prevent physical sabotage while they sort out access revocations".

The temporary closure of the offices came after Musk's 5 pm deadline of staff agreeing to create "Twitter 2.0", which Insider reports was only met with a 50% agreeance rating. The publication reports that out of the 4,000 staff members remaining at Twitter after Musk fired half of the original staff, approximately 2,000 people agreed to Musk's demands within his email by clicking the included link.

Notably, the last time that Twitter's officers were abruptly closed was when Musk laid off half of the company about three weeks after securing the acquisition. Twitter says that the locked offices were to "ensure the safety of each employee as well as Twitter systems and customer data."

It seems that Musk's strategy of providing all staff an ultimatum is a fast way of separating the employees who are willing to put in the extra mile to make Twitter better for Twitter, and the staff members who aren't willing to hit Musk's new standards. If you are interested in reading more on the Musk-Twitter situation, check out the above link.