A group of photographers was blessed with the opportunity to capture SpaceX's Falcon 9 rocket zooming past the full Moon shortly after it was launched.

Listen to the photographers excitement.

The photographer behind the incredible image seen below is Nicholas D'Alessandro, who captured SpaceX's Falcon 9 launch last Saturday, October 8, from Cape Canaveral Space Force Station in Florida. D'Alessandro spoke to PetaPixel and explained that it wasn't as simple as just rocking up to the location and snapping a few photos, as the below image was three days in the making after the launch of the rocket was scrubbed in the two days prior due to a helium leak.

Photographers are stubborn when it comes to getting the perfect shot, and their patience certainly paid off as on the third-day launch was a go, and the conditions to capture the rocket right in front of the full Moon were the best out of the three days they waited. "It happened to be the best day out of the three for the Moon's position, as it was increasingly full and lower on the horizon which each successive attempt. A fourth attempt would have been off the table as the Moon rose after the launch at that point," explains D'Alessandro. 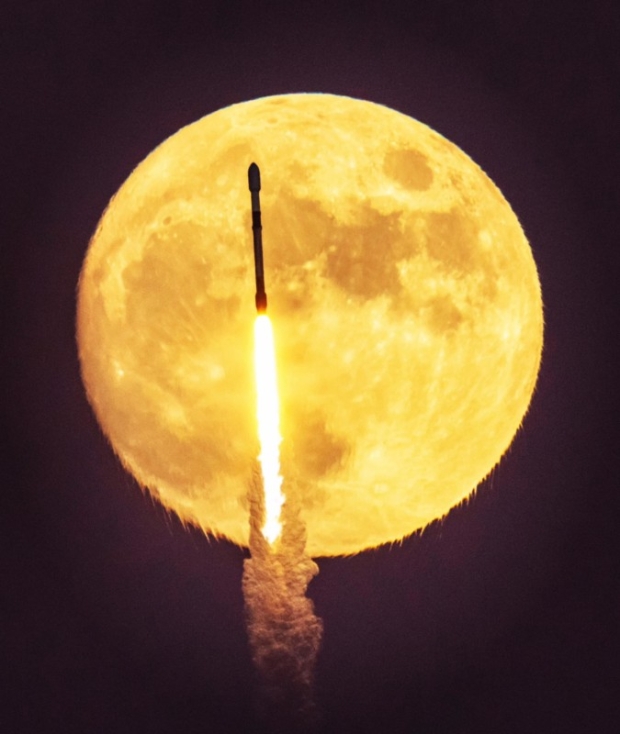 D'Alessandro said he used a Canon R5 equipped with a Sigma 150-600 lens and a 2x teleconverter to achieve a 1200mm optical zoom. Additionally, D'Alessandro explained that he used a specialized app developed for rocket photographers to assist in capturing the photo.

"A rocket enthusiast and programmer named Declan Murphy made a breakthrough for rocket photographers in recent years by developing an app called Flight Club (a reference to the movie Fight Club) that overlays any upcoming launch trajectory with the features of the sky in predictive real-time and even what your frame will look like based on the camera equipment info you enter.