A team of archaeologists is making wild discoveries in a cave that was used to sacrifice more than one hundred people more than a thousand years ago.

A new study published in the International Journal of Osteoarchaeology on September 20 details the discovery of blue cotton fibers in the teeth of the humans that were sacrificed in the Midnight Terror Cave. The cave was initially discovered 15 years ago, and after a three-year excavation conducted by professors and students from California State University, it was determined that the Midnight Terror Cave harbored more than 10,000 bones from at least 118 people, with many of these individuals showing signs of inflicted trauma prior to their deaths.

The cave was found to be used as a burial/sacrificial site during the Maya Classic period that dates between 250 to 925 CE, with researchers believing the sacrifices were to the Maya rain god Chac. The recently published study delves into the dental health of the victims and focuses on the blue fibers that were found clinging to some of the victims' teeth.

The study's lead author Amy Chan, an archaeologist from Cal State LA, scraped the teeth of some of the victims and sent the samples to the study's co-author Linda Scott Cummings, the CEO of the PaleoResearch Institute in Golden, Colorado, who determined that the samples mostly contained cotton fibers and that some of these fibers had been dyed bright blue.

The blue color is an important factor as the unique "Maya blue" pigment has been detected in other Mesoamerica sites and has been associated with ceremonies where sacrificial individuals were painted blue. 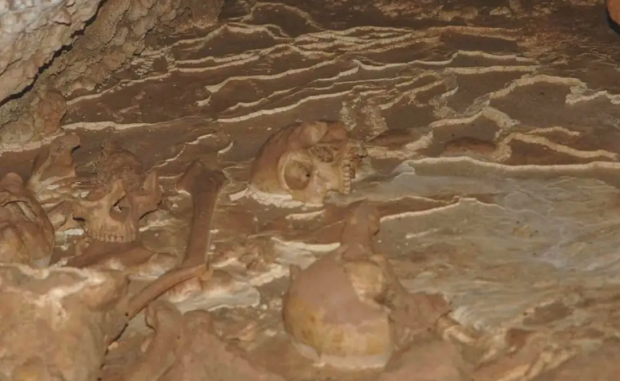 However, Chan and her study team theorized another explanation for the presence of the blue cotton fibers in the victims' mouths, and that was that the victims might have been gagged prior to their sacrifice. This theory isn't necessarily proven, and more research is needed before it can be confirmed. The study's authors write that a new study would need to be conducted on elite and non-elite Mayan burial sites to see if this pattern of blue cotton fibers can be detected.