Keanu Reeves must have cloned himself a while back because the guy just doesn't stop: Keanu reportedly wants to direct Netflix's upcoming adaption of BRZRKR... a comic book that Keanu Reeves took to Kickstarter to fund last year.

BRZRKR is about an immortal warrior that fights through the ages, similar to how John Wick seems to be in the trilogy... while BRZRKR was written by Keanu Reeves and writer Matt Kindt, the warrior himself looks virtually identical to Reeves and beats the sh*t out of people throughout history. 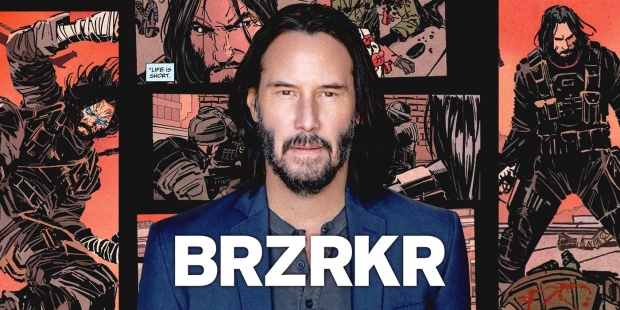 The comic book is being adapted into a live-action movie that Reeves will start in the leading role while debuting on Netflix, but during a recent interview, the Matrix and John Wick star said he was definitely interested in sitting in the director's chair for BRZRKR.

Reeves explained: "I know how it's a lot of work, but the film that I directed, Man of Tai Chi, was born, I became the director because I was part of the writing process, and I didn't want to hand it over. I was like, oh, okay, I have to direct this. I'm not quite there yet on BRZRKR. I have to read the script, but I'm also interested in having a collaborator and what they could bring to it".

Man of Tai Chi was the first and last time Reeves directed a movie, so it only makes sense that he directs the movie that's based on the comic book he created.

Recently, BRZRKR screenwriter Mattson Tomlin tweeted out that he'd finished his draft on the script for BRZRKR. You can see those tweets below: