There is no argument that autonomous vehicles are hitting the road in higher volume, though it brings up safety issues related to both drivers and pedestrians. To improve pedestrian safety, installing robotic eyes on autonomous vehicles may improve safety for people out on the street, according to research from the University of Tokyo. 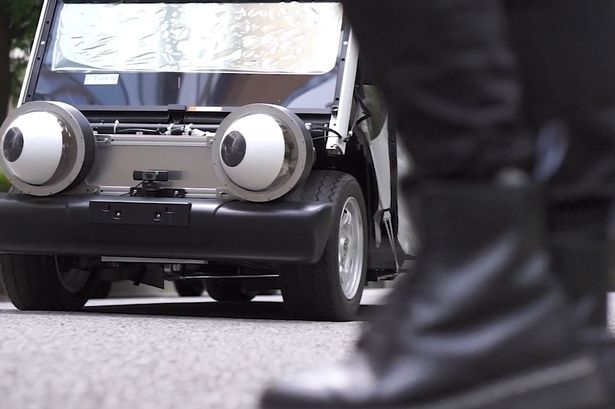 Once properly programmed, the robotic eyes either look at a pedestrian or look away, so each person on the street is aware of where the vehicle is effectively looking. Even with autonomous technology advancing, the interaction between self-driving cars and the environment around them - not including other vehicles on the roadway - is something that must be looked at more closely.

If everyone in a self-driving vehicle is not paying direct attention to the road around them, pedestrians have even less to gauge whether a vehicle is aware of their presence. As part of testing, researchers had two scenarios with the eyes and two without. The test vehicle either noticed the pedestrian and was going to keep driving or would stop. With the eyes, they were either actively engaged with the pedestrian or looking somewhere else.

Researchers found male participants in the study made more dangerous road-crossing decisions, but errors were reduced by the eye gaze from the cart.

As noted by Chia-Ming Chang, project lecturer and a member of the research team, said in a press release:

"The results suggested a clear difference between genders, which was very surprising and unexpected. While other factors like age and background might have also influenced the participants' reactions, we believe this is an important point, as it shows that different road users may have different behaviors and needs, that require different communication ways in our future self-driving world."

If this is a viable long-term solution, then it's possible for the mechanical eyes to undergo a bit of an aesthetic redesign before being placed on actual cars. Not surprisingly, some people found the current test design to be rather off-putting and sort of creepy. Even so, the eyes were able to help pedestrians anticipate what the vehicle intended to do, making it just a little bit safer.

The Gazing Car in action: