It seems that leading into NVIDIA's next-gen Ada Lovelace GPU architecture being unleashed, we're hearing all sorts of rumors on the new RTX 40 series GPUs... but now we're seeing the GeForce RTX 3080 with 20GB of GDDR6X hitting shelves in China.

GPU mining is winding down for Ethereum, so crypto market farms are now switching to mining alternative cryptocurrencies or selling their hardware. Some of them are selling up, and this is how we're discovering that alternate and unreleased graphics cards were being used to mine cryptocurrency. The unreleased GeForce RTX 3080 with 20GB of GDDR6X memory is one of them.

You can see here in the photo that we have the "GA102-250-KD" GPU with MSI's custom "VENTUS 3X 20G OC" right there on the back of the card. This could be an elaborate fake, but it would be quite the effort to go to for well... I don't know what you'd gain. But NVIDIA selling custom models of its GeForce RTX 3080 to miners en masse, and we're only finding out about it on the months-away eve of next-gen Ada Lovelace GPUs... gee.

This means that NVIDIA has been making:

It's not just a crypto mining GPU either... it has full display connectivity with 1 x HDMI 2.1 port and 3 x DisplayPort 1.4 connectors like usual. This means it would slot right into a PC and have displays connected to it, versus a mining-only GPU without display connectors. 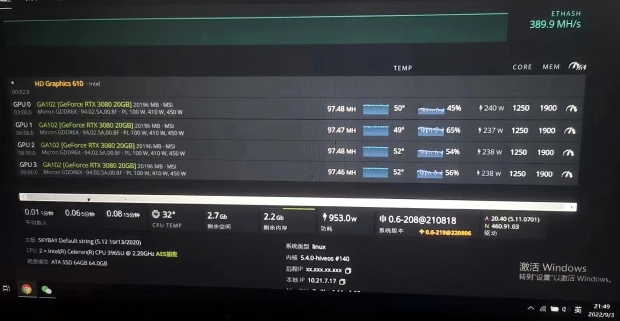