NASA's James Webb Space Telescope (JWST) has only been operating for a few months now, and it has already captured its first direct image of an exoplanet. 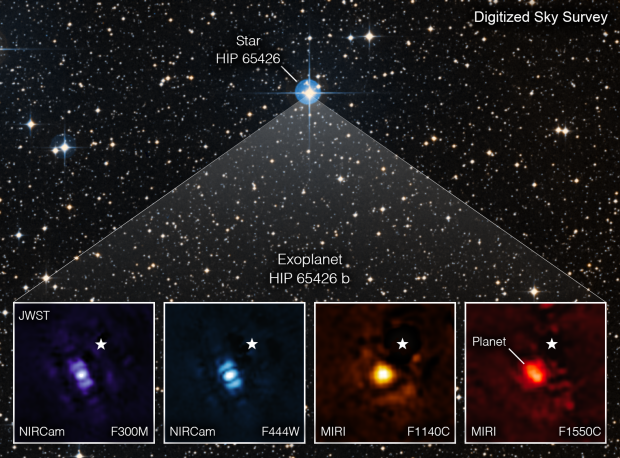 Using Webb's Near-Infrared Camera (NIRCam) and the Mid-Infrared Instrument (MIRI), the high-tech space telescope was able to capture a gas giant planet orbiting the star called HIP 65426, which was first discovered in 2017 with the Very Large Telescope located in Chile. Webb followed up on previous observations of the star, and using its infrared instruments, the space telescope focused on the exoplanet HIP 65426 b.

Notably, exoplanets aren't particularly easy to spot as they are much fainter than the stars they're orbiting. As for HIP 65426 b, this exoplanet is about 10,000 times fainter than its local star in the near-infrared and a couple thousand times fainter in mid-infrared light. Another factor for HIP 65426 b's dimness is how far away it is from its parent star, with estimations putting its orbit around HIP 65426 at 100 times the distance between the Sun and Earth.

Researchers were able to capture the exoplanet in four different light filters, with each of the filters showing the planet in a different spectrum of light. Webb is capable of blocking the light from the parent star using a device called a coronograph, which is equipped to both NIRCam and MIRI.

As explained by Aarynn Carter, an astronomer at the University of California, Santa Cruz, at first, the images only showed light being produced by the star, but after careful image processing, the light from the parent star was removed, and the planet was revealed.

"Obtaining this image felt like digging for space treasure. At first, all I could see was light from the star, but with careful image processing I was able to remove that light and uncover the planet," said Carter.

In NASA's blog post on the recent Webb achievement, Sasha Hinkley, associate professor of physics and astronomy at the University of Exeter in the United Kingdom, who led these observations, explained that these observations by Webb are a "transformative moment not only for Webb but also for astronomy."

NASA writes that while this isn't the very first exoplanet observation, as the famous Hubble Space Telescope holds that title, observations of exoplanets such as HIP 65426 b pave the way forward for Webb's future exoplanet exploration. For more information on this story, check out the link below.

"I think what's most exciting is that we've only just begun. There are many more images of exoplanets to come that will shape our overall understanding of their physics, chemistry, and formation. We may even discover previously unknown planets, too," said Carter.