NASA's James Webb Space Telescope (JWST) is making waves with its new observations as the observatory has recently discovered CO2 on an exoplanet.

NASA has taken to its blog and social channels to announce that Webb has captured the very first evidence of carbon dioxide in the atmosphere of a planet outside of our solar system. The space agency explains that Webb's observations of a gas giant planet named WASP-39 b, a planet orbiting a Sun-like star approximately 700 light years from Earth. NASA writes that this evidence gives researchers important insights into how planet formation and how Webb can be fine-tuned to detect CO2 in the atmosphere of other planets.

WASP-39 b is about one-quarter the size of Jupiter, with a diameter 1.3 times greater than Jupiter. Additionally, the planet operates at a temperature of 1,600 Fahrenheit, with previous observations from other NASA telescopes such as Hubble and Spitzer revealing the presence of water vapor, potassium, and sodium within WASP-39 b's atmosphere. Using Webb's high-tech infrared instruments, researchers have now confirmed the presence of carbon dioxide, paving the way for Webb's continuous effort to probe exoplanet atmospheres in search of their chemical composition.

The researchers explained the value in being able to analyze the atmosphere of an exoplanet to find its chemical composition, with Mike Line from Arizona State University and a member of the research team explained that molecules such as carbon dioxide give insights into the planet's evolution. 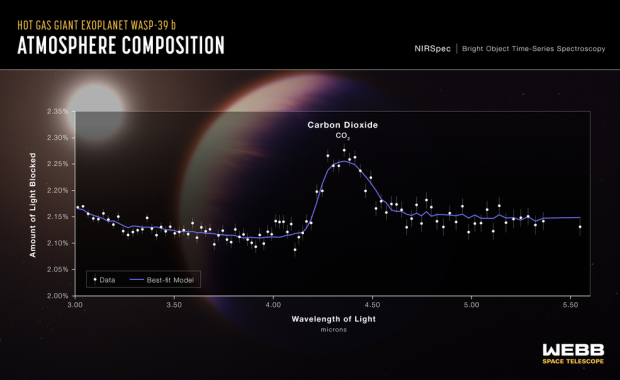 "Carbon dioxide molecules are sensitive tracers of the story of planet formation. By measuring this carbon dioxide feature, we can determine how much solid versus how much gaseous material was used to form this gas giant planet. In the coming decade, JWST will make this measurement for a variety of planets, providing insight into the details of how planets form and the uniqueness of our own solar system," said Mike Line. 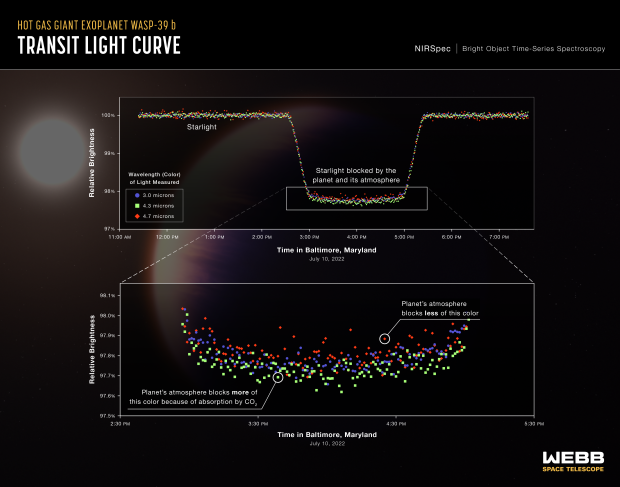 Zafar Rustamkulov, a graduate student at Johns Hopkins University and member of the JWST Transiting Exoplanet Community Early Release Science team, which was conducting the investigation, explained the experience of seeing the data from Webb's observations appear on his screen, with Rustamkulov saying the carbon dioxide readings "grabbed me" and that it was a "special moment" that crosses an important threshold in the exponentially growing field of exoplanet sciences.

In other NASA news, the space agency is launching the first mission in its effort to get humans back on the surface of the Moon, as NASA prepares for the Artemis 1 launch, where the SLS rocket will go on a journey around the Moon.