An international team of researchers have published what is claimed to be the largest image captured by the James Webb Space Telescope (JWST) to date.

NASA's James Webb Space Telescope has been making headlines since it began its scientific operations in July, with the space agency publishing the first batch of images snapped by the space telescope's next-generations instruments. Now, an international team of researchers that includes 105 scientists from 19 from 28 institutions around the world have used the telescopes instruments to gather an immense amount of data on the cosmos. The Cosmic Evolution Early Release Science Study (CEERS) has now released the image.

Webb's Near Infrared Camera (NIRCam), Near Infrared Spectrograph (NIRSpec), and its Mid-Infrared Instrument (MIRI) were all used to gather the data, which was then converted to imagery and then stitched together to form an incredible mosaic piece. Out of the myriad of galaxies captured in the images the researchers honed in on six specific galaxies. A blue spiral galaxy, some elliptical galaxies, a galaxy nicknamed Pac-Man for its resembling shape, and galaxies that are extremely old - dating around 9 billion years ago. 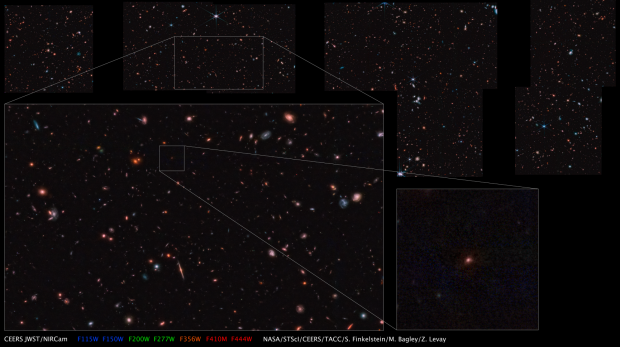 One of the galaxies that was captured in the image one of the most distant galaxies every found by humans. The galaxy is called Maisie's galaxy in honor of project head Steven Finkelstein's daughter, and according to results from the study, if the galaxy is confirmed to be at a redshift greater than 11.8, with future observations, it would mean that Webb has observed a galaxy as it was just 400 million years after the Big Bang occurred.

If you are interested in reading more about Webb, or any other space news, check out the below stories. NASA is planning on deliberately crashing a spacecraft into an asteroid next month in a first-of-its-kind asteroid deflection test. At the end of August NASA plans on launching the Artemis I mission which will involve sending a rocket around the moon, which, if successful, will be the furthest rocket trip ever.

The flight won't go without passengers, but they won't be human as mannequins will form the crew as NASA wants to ensure maximum safety of any human passengers taking a trip back to the moon.