China Central Television (CCTV) has shared footage from its ever-growing Tiangong space station, captured using a camera on one of its robotic arms.

The first module launched to make up the Tiangong space station was the Tianhe core module, which entered orbit on April 29th, 2021, and was followed by the Wentian module, which joined Tianhe on July 24th, 2022. Both modules came equipped with their own robotic arm, with Tiangong carrying an arm 33 feet (10 meters) long and Wentian bringing an arm measuring 19.6 feet (6 meters).

The larger of the two arms has a camera, which the China National Space Administration (CNSA) has recently used to inspect the exterior of the space station and "ensure it is ready to move the Wentian lab module from its current docking bay to its permanent dock." In the footage captured by the robot, you can see Earth's ocean and clouds as the station orbits 236 miles (380 kilometers) above the surface.

Also visible is the Shenzhou 14 spacecraft that shuttled the current crew members to the station and other external features such as control moment gyroscopes (CMGs) that control the station's orientation while in orbit. Once the Wentian module has been properly conjoined with the Tianhe module, the third and final module, Mengtian, will launch to complete the space station. It is scheduled to launch in October 2022, and the finalized space station is expected to operate for at least ten years. 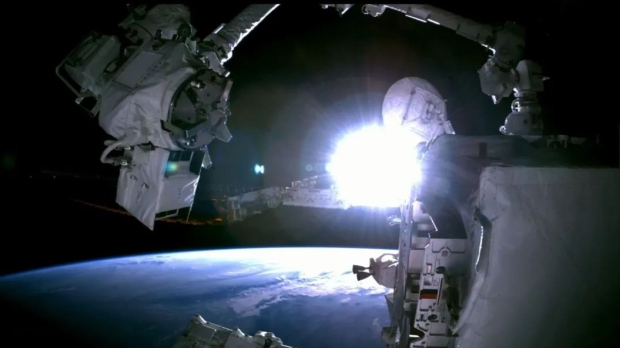