The California Air Resources Board voted to pass the new mandates on August 25th, 2022. 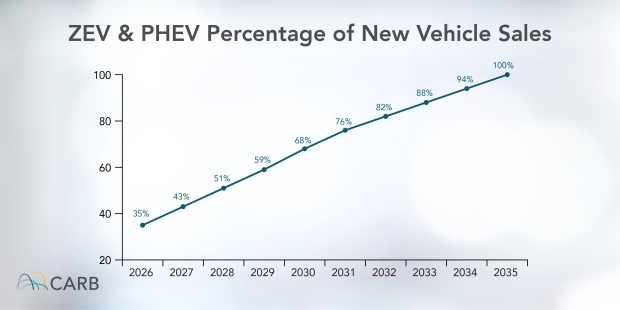 Credit: Office of the Governor of California

The new official state policy mandates that any cars and light trucks sold from 2035 onwards must be zero-emission vehicles (ZEVs), meaning they are either electric or hydrogen-powered, with no options for gasoline or diesel. The board was created in 1967 to reduce the toxic smog that hung over Los Angeles at the time, and it has since set emissions and fuel efficiency mandates that many other states have followed.

Lauren Sanchez, the climate advisor for Governor Gavin Newsom, marked that occasion as "a huge day not only for California but the entire world," with the founding director of the Institute of Transportation Studies at the University of California Davis (UC Davis), Dan Sperling, saying it the mandate "is the most important and transformative action that [the air resources board] has ever taken."

Automakers could be fined $20,000 per non-compliant vehicle come 2035, and the state has confidence that consumers will have fully embraced ZEVs by the time the mandate is in effect. In 2012, fewer than 2% of new vehicles sold were electric, which climbed to 7% in 2018, but as of this year has reached 16%. According to the board, 1.13 million zero-emission vehicles are registered in California, making up 43% of all zero-emission vehicles in the United States.

The mandates steadily come into effect in stages up until 2035, with 35% of new cars being zero emission by 2026, 68% by 2030, and 100% by 2035. Though board Chair Liane Randolph said the move would "essentially end vehicle emissions altogether," previously fossil-fuel powered vehicles will still be allowed to be driven, and such vehicles will still be able to be sold in a used condition. Heavy trucks will also be free from the mandate for a while longer, with 100% zero-emissions mandates likely to come into effect in 2045.

For more on this story, check out this article.