GIGABYTE has just shown off its new AORUS Gen5 10000 SSD, with some blistering next-gen PCIe 5.0 SSD speeds of up to 12.5GB/sec reads and 10GB/sec writes.

GIGABYTE says that its new AORUS Gen5 10000 SSD is up to 55% faster than PCIe 4.0 SSDs, which were tapping out at around 7.5GB/sec. You won't be able to pull these huge 12GB/sec+ speeds without a PCIe 5.0-capable motherboard, which is perfect timing as Intel and AMD are both about to launch their respective next-gen CPU and motherboard platforms, which will both take these new PCIe 5.0 SSDs and let you drive up 12GB/sec+ reads on your next-gen SSD.

GIGABYTE says that its new AORUS Gen5 10000 SSDs are enhanced by the multi-core architecture of the Phison PS5026-E26 controller, so it will not only improve AI multi-tasking operations, but "takes content creators, gamers, and users eager for extreme performance to the next level". 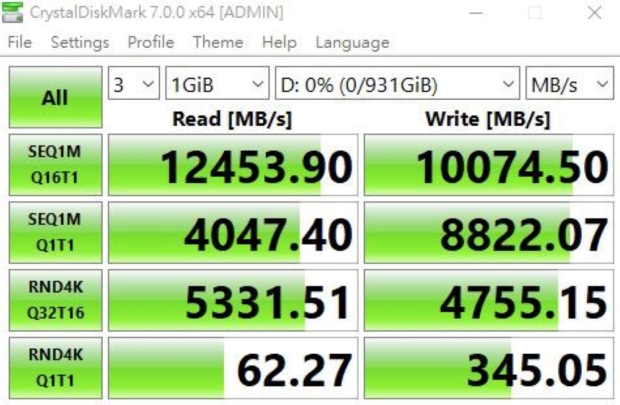 AMD and Phison have shown off the next-gen PS5026-E26 PCIe 5.0 SSD controller not too long ago, tapping Micron's new 232-layer B58R TLC technology which is "still in the tuning phase" which is why we're seeing lower speeds (10GB/sec max, versus 12GB/sec capable on the SSD itself). We've already seen Phison show off its new PS5026-E26 PCIe Gen5 SSD controller before, where it was pushing a higher 12.5GB/sec on an AMD X670-based motherboard just back in late May.

Jackson Hsu, Director of the GIGABYTE Channel Solutions Product Development Division said: "With PCIe 5.0 support on new motherboard platform, the bandwidth and transfer performance are raised to the next level. As the first manufacturer to have both motherboards and SSD product lines in the market, GIGABYTE is also the first to unveil the AORUS Gen5 10000 SSD. This new product brings blistering fast storage performance with ultra durability and compatibility to users for optimal quality and performance".