A man has flown a drone over an active volcano that is currently going off in Iceland, and during the flyover, the drone was struck by lava, but lived to tell the tale.

A content creator named Parker Sheppard has taken his small drone to what seems to be the Fagradalsfjall volcano that recently became active after a series of earthquakes struck the area. The Fagradalsfjall volcano became active on August 3, sparking a heavy amount of tourism to the area as individuals can get extremely close to the action. Sheppard took his drone and flew it around the erupting volcanic fissure, capturing absolutely stunning footage of the bubbling lava with his GoPro.

Throughout the flight, Sheppard moved too close to the unpredictable eruptions, and the drone flew straight through a spray of hot lava. The lava immediately stuck to the drone, and in the above footage, you can hear the damage that it caused despite such a small amount. In the below video, you can hear Sheppard saying, "oh my god, I just went straight through so much lava. I think my camera is messed up, I can't see anything it's so blurry".

After capturing as much footage as he could, Sheppard flew the drone back and inspected it, discovering that the lava impact had damaged the GoPro and many of the drone's propellers were melted. The footage is absolutely incredible and is perhaps the closest a drone has gotten to the Fagradalsfjall active fissure. Any closer, and it would have likely been engulfed by a lava wave.

If you are interested in any more drone footage such as this be sure to check out Sheppard's social medias - his TikTok is linked above.

In other news, the US just flexed its military might to the rest of the world by launching a nuclear deterrent, while claims are coming out from both Russia and Ukraine about missiles being launched at Europe's largest nuclear power plant. 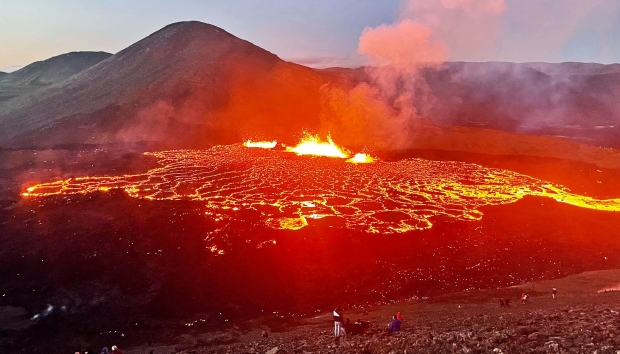 Furthermore, SpaceX and Tesla CEO Elon Musk has cleared up some of the confusion surrounding him purchasing Coca-Cola to put the cocaine back in and Manchester United. Additionally, Twitter is coming after Musk's text messages over backing out of his deal to purchase the world's second largest social media platform Twitter.