A paper on the new torpedo system has been published in the Journal of Unmanned Undersea Systems, run by the China Shipbuilding Industry Corporation. 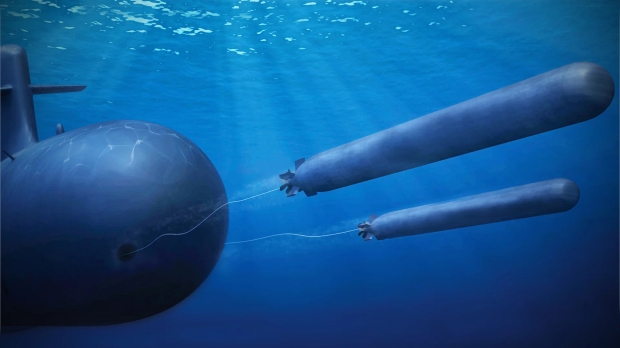 Researchers from Beijing have created designs for a small, cheap, and disposable nuclear reactor to power individual torpedoes. The torpedoes would be similar to the uncrewed Russian Poseidon submarine, the world's first nuclear-powered underwater drone. However, the torpedoes would be much smaller to enable mass production and deployable from a standard torpedo tube.

The torpedoes would have a range of ten thousand kilometers (6,200 miles) and reach a cruising speed of more than 32 knots (60km/h or 37mph), allowing them to cross the Pacific Ocean in roughly a week. The mini-reactor would be as heavy as two average adult males and use less than 4 kilograms (8.8 pounds) of low-concentration uranium fuel to generate over 1.4 megawatts of heat.

Only 6% of this would become electricity, but the low efficiency is still enough to charge the torpedoes' batteries sufficiently for a single trip. Once the torpedo has reached cruising speed, and its battery is adequately charged, the torpedo can dump its reactor, letting it drop to the seabed and continue on battery power.

"Thanks to its high flexibility and low cost, this unmanned underwater vehicle equipped with the nuclear power system can be used as a conventional force like an attack nuclear submarine, rather than as a nuclear missile," said lead scientist Guo Jian from the China Institute of Atomic Energy.

"When the manufacturing cost is low enough, even if the nuclear powered device can only be used once, the overall cost will be low. This in turn stimulates us to make the system simpler and smaller," the researchers said.

"Even if the hull is broken, the interior is filled with water, and the whole body falls into the wet sand on the seabed, the reactor will not have a critical accident. Safety is ensured," the researchers continued.