AMD confirmed a few tidbits for its next-gen RDNA 3 and RDNA 4 GPU architectures during its recent Financial Analyst Day 2022 where Senior Vice President of Radeon Technologies Group, David Wang, showed off the roadmap for next-gen RDNA and CDNA GPUs. 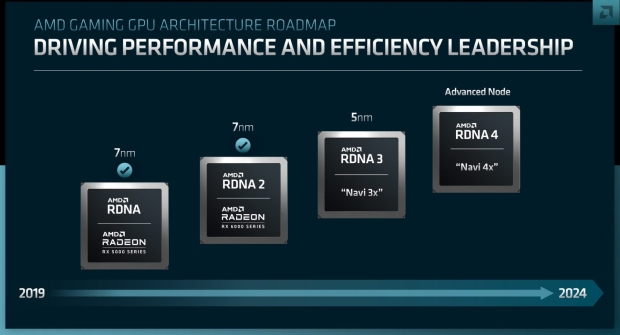 In the update, AMD confirmed that its next-gen GPU architecture after RDNA 3 debuts later this year, is RDNA 4 which is expected in 2024. In the slide, we can see that AMD shows us that RDNA was made on 7nm, RDNA 2 was also made on 7nm, next-gen RDNA 3 is made on 5nm, and the next-next-gen RDNA 4 is made on an "Advanced Node".

This isn't new for anyone who keeps up with GPU rumors, where I reported on rumors about RDNA 4 using 3nm and 5nm nodes for RDNA 4 MCM GPUs (multi-chip module, or chiplet design as AMD just confirmed for its RDNA 3 GPUs). Back in August 2020, I was reporting from leaks that said the RDNA 4 is a "full product line with a common architecture, and RDNA 4 MCM will use 3nm+5nm". It seems RDNA 3 will be made on 5nm, and RDNA 4 to be made on 3nm+5nm (with GPU tiles on 3nm + I/O tile on 5nm).

In very recent news, AMD confirmed that RDNA 3 will have a 50% performance-per-watt uplift over RDNA 2. AMD says that the 50% performance-per-watt uplift is achieved through the shift to the new 5nm process node by TSMC, advanced chiplet packaging, rearchitected compute unit, optimized graphics pipeline, and next-gen AMD Infinity Cache technology. 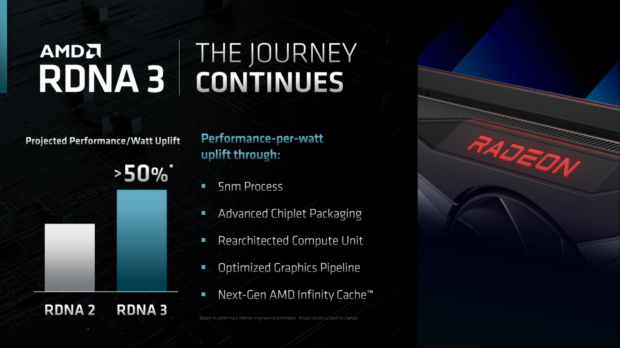 It's been a long time coming, since I covered AMD's next-gen RDNA 3 GPU extensively back in August 2020, nearly two years ago now.

But slowly over the past two years, all of the small steps to get here have been taken, including TSMC getting its brand new 5nm process node pumping away, ready for RDNA 3. Exciting times for GPUs in the coming months, and I truly can't wait.