The Subaru Telescope, located in Hawaii near Mauna Kea and situated at an altitude of 13,579 feet, has captured a video of a "flying whirlpool".

SpaceWeather.com has described the object as a "flying whirlpool," and it was spotted by the Subaru Telescope on Sunday, April 17, only hours after the launch of SpaceX's Falcon 9 rocket. LiveScience and SpaceWeather.com confirm that the "flying whirlpool" was caused by the post-deorbit-burn fuel vent of the Falcon 9 upper stage that sends it out of its orbit back down to Earth to burn up eventually.

SpaceX launched the Falcon 9 rocket carrying a classified payload for the U.S. National Reconnaissance Office (NRO) from Vandenberg Space Force Base in California on April 17. While the upper stage of the Falcon 9 isn't reusable, the first stage is, and its reusability was displayed by a few videos posted to SpaceX's official Twitter account. These videos show the first stage successfully landing atop a drone ship in the Pacific Ocean.

According to Netherlands-based satellite tracker Marco Langbroek who spoke to SpaceWeather.com, the above video showcases "the characteristic spiral caused by the post-deorbit-burn fuel vent of the Falcon 9 upper stage, which was deorbited over the Pacific [Ocean] just after the end of the 1st revolution." 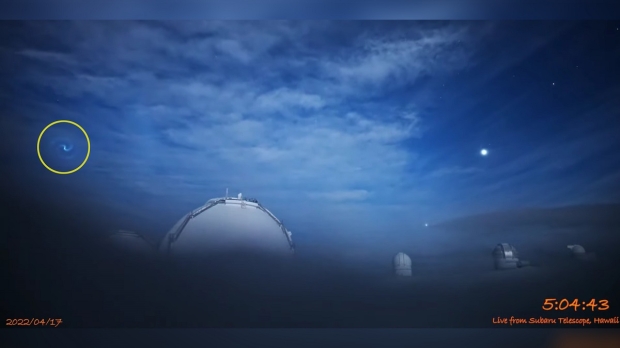