The President of Ukraine, Volodymyr Zelenskyy, has commented on the recently viral video of a woman interrupting a live Russian news broadcast to protest the war.

The video has been acquired by numerous Western media outlets and has gone viral on social media's such as Twitter and Facebook. A reporter is seen running out during a live Channel One news broadcast to hold up a sign towards the camera. The sign called for "No war", and warned viewers not to trust the news they are watching as they are being lied to about the war. The sign also featured a sentence in English that read, "Russians against war".

According to reports from CNN, the video has sent shockwaves throughout Russian society as the woman was immediately arrested and can face a jail sentence of up to 15 years, under the new laws passed by Russia's President Vladimir Putin that allows Russian authorities to imprison any individual that speaks out against the Russian government.

"I am grateful to those Russians who do not stop trying to convey the truth, to those who fight disinformation and tell the truth, real facts to their friends and loved ones. And personally to the woman who entered the studio of Channel One with a poster against the war," said Ukraine's President Volodymyr Zelenskyy. 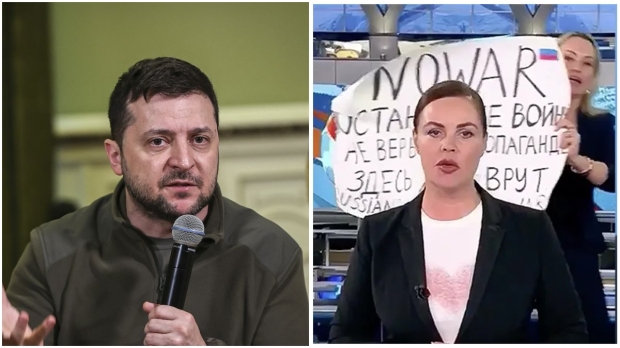