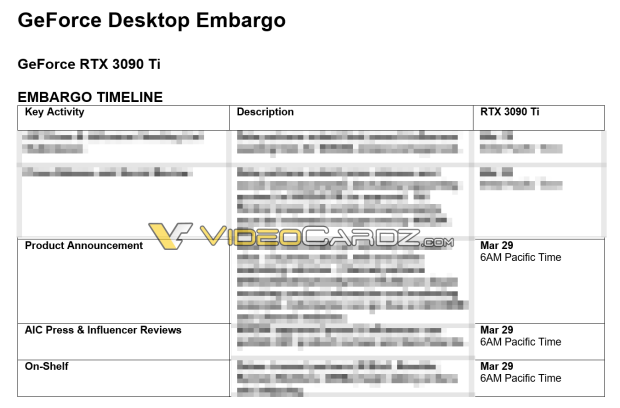 The new information is coming from VideoCardz, which reports that "product reviews, including custom models, will also be published" on March 29. NVIDIA has reportedly shared the embargo information for the GeForce RTX 3090 Ti with its board partners, as well as final dates for submission of the press release (so that NVIDIA can green light it) and the review seeding list (to people like me).

NVIDIA's new flagship GeForce RTX 3090 Ti graphics card will be unveiled on March 29 at 6AM PST.

There could be more hardware-related or even BIOS-level issues with the card... but with the amount of power driving through the card, Samsung's 8nm process not being the best (up against TSMC and its 7nm and lower nodes), and many other factors (the pandemic, supply chains in South Korea, etc).

In a post on the Chiphell forums, we're being told that the GeForce RTX 3090 Ti is "bigger than expected" and that the GDDR6X memory "needs to be replaced". The poster adds that the GDDR6X memory that's not placed on the PCB directly, needs to be replaced with new memory... that's a major problem, major, major problem... and explains the out-of-nowhere delays and NVIDIA ghosting the entire world (and the tech press).