All NewsBusiness, Financial & LegalCases, Cooling & PSUContests & GiveawaysCPU, APU & ChipsetsDealsDisplays & ProjectorsGamingMotherboardsScience, Space & RoboticsStorageVideo CardsVirtual & Augmented Reality
All ReviewsAll ArticlesAudio, Sound & SpeakersCases, Cooling & PSUCPUs, Chipsets & SoCsComputer SystemsDisplays & ProjectorsGamingMotherboardsNetworkingPeripheralsRAMStorageVideo Cards
GuidesGamingAsk the ExpertsNewsletterAboutForums
RTX 3090 TiRTX 4090Diablo 2GTA 6Halo InfiniteElon MuskRTX 3080HDMI 2.1
If you're a fan of small form factor systems you're most likely familiar with Albatron's KI690-AM2 board. Although it's taken the company a while to actually get product out in the market, you can actually buy this board quite easily now, but if it's not what you've been looking for, the good news is that the company has a new board for Intel's Mobile Core 2 Duo or Celeron processors, the PI965.

It has some rather interesting features that set it apart from most other mini ITX boards of this type, as it has been designed with AV usage in mind. It has component video and DVI outputs onboard and it also has an optical S/PDIF out alongside 7.1-channel analogue outputs. The board also features dual Gigabit Ethernet and four rear USB 2.0 ports with a further four via onboard connectors. 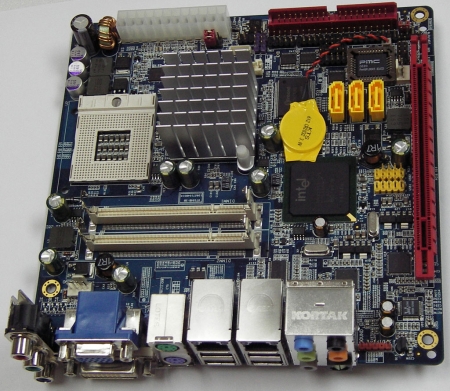 As it's based on Intel's mobile GME965 chipset, the integrated graphics option might be appealing to you, no matter how highly Intel speaks about its X3100 graphics engine. The good news here is that Albatron has incorporated a x16 PCI Express slot so you can add a graphics card of your choice. For further expansion there's a mini PCI slot at the bottom of the board that accepts a wide range of notebook size PCI cards such as Wi-Fi, Wi-Fi and Bluetooth combo cards and TV-tuners to mention a few.

It also has two SO-DIMM slots for memory expansion and this means that it works with dual channel memory. There are three SATA connectors as well as a single IDE connector and you'll also find pin headers for a serial and parallel port. If it wasn't for the cost of mobile processors, this could quite easily become a really popular product for anyone looking at building a low noise HTPC. We're not sure what this board will retail for, but it's most likely going to be more than the AU$300 or so that the KI690-AM2 is retailing for. However, Albatron told us that they're trying to lower the prices on their mini ITX boards and thus create a bigger mass market appeal.

You can find the product page here
Newsletter Subscription