Steam has amassed a new concurrent user record as PC gaming surges through 2022. 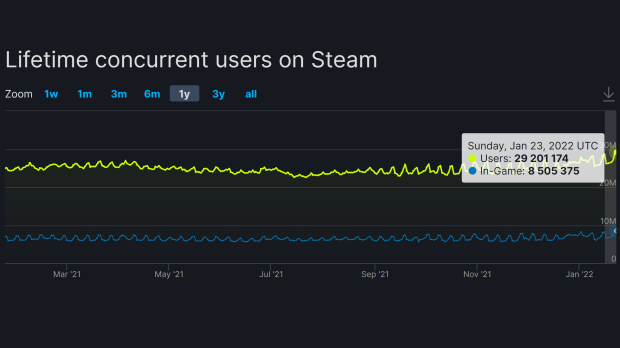 Today Valve's platform is full steam ahead: Steam has now hit a new all-time high of 29,201,174 lifetime concurrent users, up from the previous 28.7 million mark set earlier this month. That's two new records set in the beginning of 2022 alone and the numbers could inflate more as new releases start popping up.

It's worth noting these are users, not people who are in-game. The numbers for actual in-game users is at 8.5 million, so roughly 30% of the people who are logged in are actually playing games.

PC gaming continues to grow as major companies like Sony start releasing major titles onto Steam, including once-PlayStation exclusive games like God of War, Horizon Zero Dawn, and the upcoming Uncharted collection. Microsoft, SEGA and Square Enix are all supporting Steam with new releases, and EA recently brought its games back to the storefront.