Steam kicks off 2022 with a new player record, showing that PC gaming is bigger than ever. 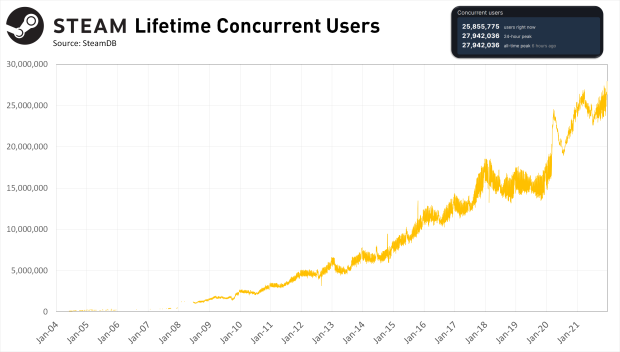 Two days into 2022 and Valve has already smashed previous player records on Steam. According to new data from Steam DB, Valve's bustling online marketplace had 27,942,036 peak concurrent users logged in at once. That's roughly 557,000 more users logged in now than in November 2021, the previous record month.

It's worth noting that only 8.2 million people were actually playing games in the last 24 hours, or roughly 30% of total concurrent users. Valve recently shared the top-selling Steam games of 2021 and heavy-hitters like Apex Legends, PUBG, Valheim, and first-party titles DOTA 2 and Counter-Strike dominated the list.