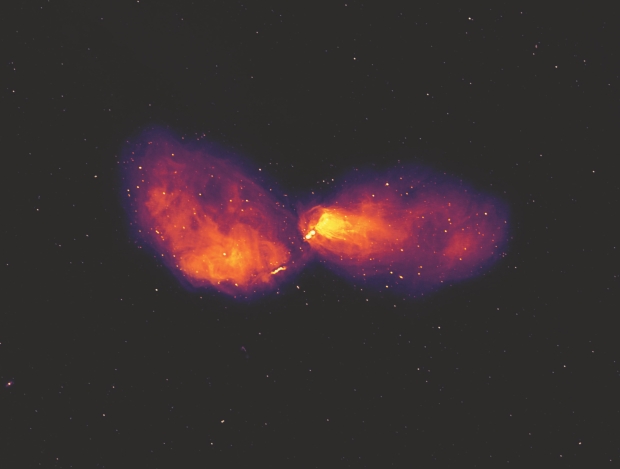 The eruption extends through eight degrees of the sky when viewed from Earth, equivalent to sixteen full moons side by side. The image was captured using the Murchison Widefield Array (MWA) telescope in Western Australia. Researchers suggest the new study's findings corroborate a theory known as 'Chaotic Cold Accretion' (CCA).

"In this model, clouds of cold gas condense in the galactic halo and rain down onto the central regions, feeding the supermassive black hole. Triggered by this rain, the black hole vigorously reacts by launching energy back via radio jets that inflate the spectacular lobes we see in the MWA image. This study is one of the first to probe in such detail the multiphase CCA 'weather' over the full range of scales", said Dr. Massimo Gaspari of Italy's National Institute for Astrophysics.

The MWA's vast field of view, high sensitivity, and radio-quiet location allowed it to collect the masses of data necessary to create this image. The MWA serves as a precursor to the upcoming Square Kilometer Array (SKA), a collaboration between Australian and South African governments to build the world's largest radio telescopes.