Diablo 2 Resurrected is getting new runewords with the Patch 2.4 update, including the unreleased Plague and Pattern. 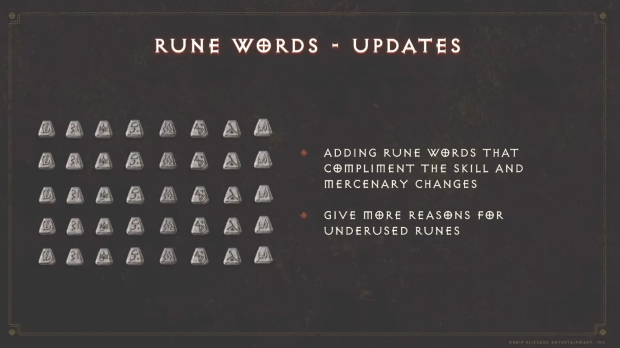 The unreleased runewords Plague and Pattern are coming to Diablo 2 Resurrected in the new v2.4 patch. These runewords were actually introduced in v1.10 way back in 2005 but were locked away in the source files, and Blizzard never actually released them in the final game.

As per the in-game files, the Plague and Pattern runewords aren't particularly impressive; Pattern is a lower-tier 3os claw RW with a cheap cost of Tal+Ort+Tir, but Plague is much more expensive and requires a high rune and one of the most versatile mid-runes in the game with a Cham+Fal+Um order. Both of the weapons don't seem very useful but Blizzard's D2R team says they will be "tweaked" for ladder play.

The D2R dev team also says these are only some of the runewords that will be introduced with v2.4, and "many more" are on the way.

"When it comes to runes...we're not bringing out new runes. It's going to be the same staple of runes that're there," said D2R's Matthew Cederquist.

"Then that middle gap for those players around level 40-60...there's this missing gap of runewords. We're trying to create runewords that complement that spread of all classes and levels while also utilizing unused runes."

A good portion of these runewords will be mid-level gear that helps diversify between the level 40 and level 80 gap and some of the higher-tier runewords will use under-utilized runes like Zod and Cham.

D2R v2.4 is due out sometime in 2022 and will be tested in the newly announced Diablo 2 Resurrected PTR.