The processor was overclocked by Charles "Fugger" Wirth to a "mere" 5.4GHz for the presentation, although he'd hit 5.6GHz the day before. He still managed to break his own SuperPi world record by 0.1 seconds from 8.5 to 8.4 seconds. He also scored some 281,000 points in Aquamark 3 and apparently broke the world record in Cinebench 10, but happened to forget to tell the audience how quick it was, although all four tests were run in 1min 43seconds. 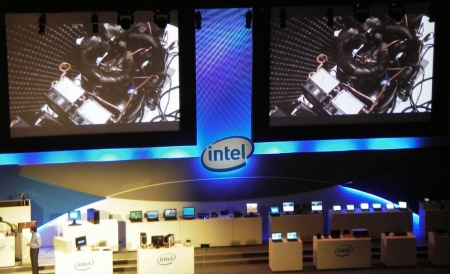 He used a cascade cooler to reach the results and it kept the CPU at between -85 to -100 degrees C. Apparently he competes regularly against liquid nitrogen and refrigeration based cooling setups with his cascade cooler. Impress results none the less and a promising start for this new core from Intel.
Newsletter Subscription