All NewsBusiness, Financial & LegalCases, Cooling & PSUContests & GiveawaysCPU, APU & ChipsetsDealsDisplays & ProjectorsGamingMotherboardsScience, Space & RoboticsStorageVideo CardsVirtual & Augmented Reality
All ReviewsAll ArticlesAudio, Sound & SpeakersCases, Cooling & PSUCPUs, Chipsets & SoCsComputer SystemsDisplays & ProjectorsGamingMotherboardsNetworkingPeripheralsRAMStorageVideo Cards
GuidesGamingAsk the ExpertsNewsletterAboutForums
RTX 3090 TiRTX 4090Diablo 2GTA 6Halo InfiniteElon MuskRTX 3080HDMI 2.1
Dell has already launched these two new models in Japan, although we're expecting them to arrive worldwide shortly. First up is the new 22-inch SP2208WFP which has a native resolution of 1,680x1,050, pretty much the norm in this segment, with a 2ms response time and a dynamic contrast ratio of 2,000:1. It also has the ability to reproduce 92 percent of the NTSC colour gamut.

But what makes it stand out from most other 22-inch LCD monitors is not only the built in 2 Megapixel webcam and the built in microphone, as it also sports a D-sub, DVI-D with HDCP and no less than three HDMI connectors. It also has a built in four port USB 2.0 hub with two side mounted ports. 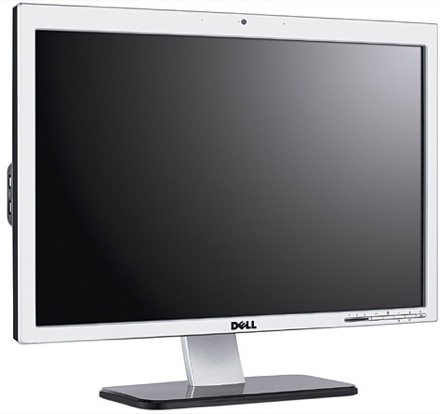 Dell also announced an updated 24-inch model, the E248WFP, which features a native resolution of 1,920x1,200. It has a contrast ratio of 1,000:1, the same colour gamut and 400cd per square meter brightness. It has a D-sub input as well as a pair of HDCP compliant DVI connectors.

The SP2208WFP is expected to retail for about US$510 and the E248WFP for $587. You can find a translated version of the SP2208WFP press release here.
Newsletter Subscription