In a recent article for Spaceweather.com, an astronomer described an object seen traveling at 26,000 mph as a "giant space volcano".

While this description isn't officially recognized, it may be the best way to describe the comet named 29P. This comet is constantly spewing "cryomagma" into space and is certainly stretching our definitions of what we call a "comet". 29P measures 37 miles in diameter It is a massive ice ball with ice volcanoes on its surface that erupt around 20 times a year. The strange comet was first discovered back in 1927, and its eruptions have been documented for quite some time. However, 29P seems angrier than ever.

Arizona amateur astronomer Eliot Herman was observing the comet and recorded four eruptions in quick succession in late September. Dr. Richard Miles of the British Astronomical Association (BAA) told Spaceweather.com, "The current outburst, which began on Sept. 25th, appears to be the most energetic of the past 40 years." Adding, "within a span of only 56 hours, four eruptions took place in quick succession, creating a 'superoutburst.'" 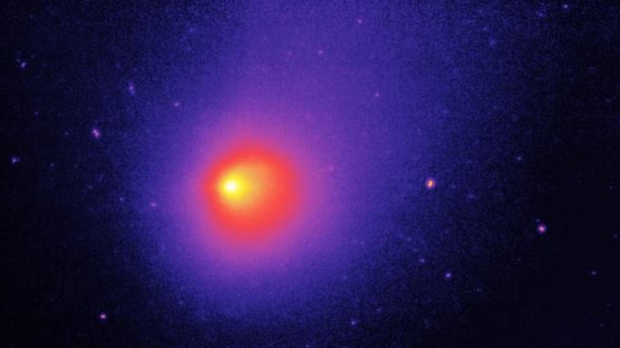 Dr. Miles' model of the comet suggests that the surface of 29P is similar to wax, and when a fissure opens on the surface, "the dissolved gas forms of nitrogen and carbon monoxide burst out of the comet, leading to the eruptions that can be viewed from Earth", reports Interesting Engineering.

Dr. Miles says 29P is, "one of the most volcanically active bodies in the entire Solar System."