Phison has revealed some juicy new details on the future of SSD controller technology, with future PCIe 5.0, PCIe 6.0, and PCIe 7.0 connectivity on the way.

The next-gen PCIe 5.0, PCIe 6.0, and PCIe 7.0 SSD technology was talked about during MSI's recent Insider Livestream, where Phison CTO Sebastien Jean talked about all things next-gen SSDs and PCIe tech. He said that it takes around 16-18 months to develop a brand new SSD design, while the technology and enabling for a new silicon process node starts 2-3 years earlier.

The bigger upgrades for future SSDs will be that you could have a PCIe 6.0 x4 or PCIe 7.0 x4 SSD and it would be insanely fast, blowing away whatever is inside of your PC right now no matter how good (how fast) it is. 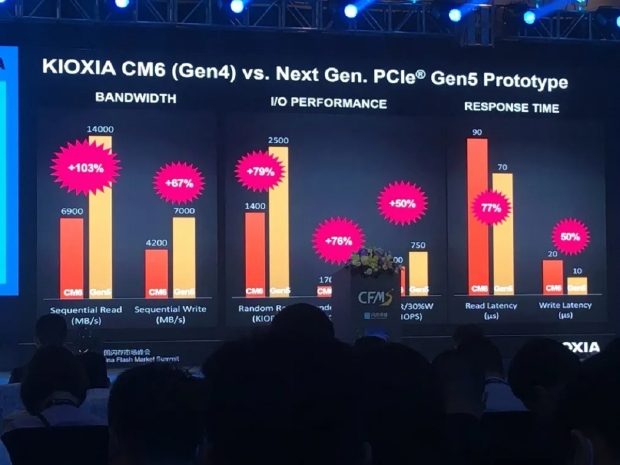 As we move towards next-gen SSDs using more power, which also generates more heat (along with the NAND flash going off its tits at huge 16GB/sec+ speeds) then active cooling becomes a thing. PCIe 5.0 SSDs will have a 14W TDP, but PCIe 6.0 SSDs ramp things up to around 28W TDP... this is nothing to a CPU or GPU, but it is a gigantic increase for SSDs and now SSD cooling will become very, very important for SSD makers.

If you didn't know already, around 30% of the heat is dissipated through the M.2 connector while 70% is done through the M.2 screw. New interfaces and slots will be used in the future, while current PCIe 4.0 SSD DRAM and controllers are fine to operate at up to 125C, but the NAND needs extremely good cooling because if it reaches 80C you're going to active the thermal shutdown.

This means that SSDs need to be chilled down to 50C, with higher temperatures resulting in reduced speeds (which would suck on a super-fast PCIe 4.0, PCIe 5.0, or super-next-gen PCIe 6.0 SSD).