If you purchased Digital World Acquisition Corp. (DWAC) a week ago... hell, just a couple of days ago, you'd be laughing all the way to the bank right now. 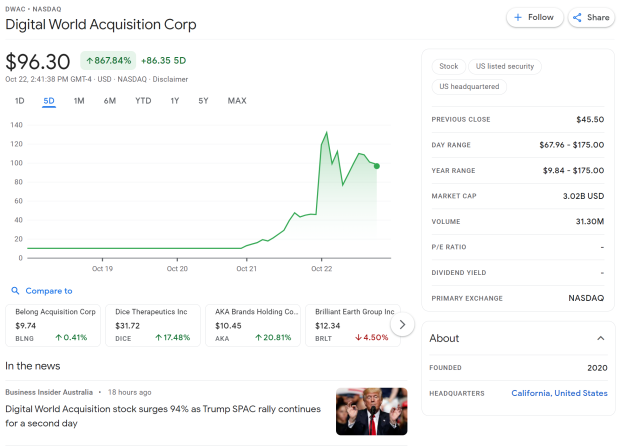 President Donald J. Trump announced his new social media company, TRUTH Social, in the last 24 hours or so, and was announced that Trump Media & Technology Group and Digital World Acquisition Corp. have entered into a definitive merger agreement that makes TMTG into a publicly listed company, subject to regulatory and stockholder approval.

Between then and now, just 24 hours or so, Digital World Acquisition Corp. stock has skyrocketed from around $10 or so, through to a huge $105 representing an increase of 1000% or more. We're talking crazy manic meme-level crypto gains, but in the "real-world" of stock trading. DWAC stock skyrocketed 357% just today, which is crazy.

President Donald Trump explained when he unveiled TRUTH Social: "I created Truth Social and TMTG to stand up to the tyranny of Big Tech. We live in a world where the Taliban has a huge presence on Twitter, yet your favorite American President has been silenced. This is unacceptable. I am excited to send out my first truth on Truth Social very soon. TMTG was founded with a mission to give a voice to all".

"The transaction values Trump Media & Technology Group at an initial enterprise value of $875 Million, with a potential additional earnout of $825 Million in additional shares (at the valuation they are granted) for a cumulative valuation of up to $1.7 Billion depending on the performance of the stock price post-business combination".