Observing objects out in space with telescopes has its challenges, and sometimes astronomers come across that are much further away than anticipated through a phenomenon called gravitational lensing.

Gravitational lensing ocurrs when a large object such as galaxy is between Earth and an object much further away. Due to the immense gravity of the object, spacetime is warped, and when astronomers peer out into the void to observe the distant object, the warped spacetime acts as a magnifying glass, allowing researchers to see much further than what they originally would be able to.

While gravitational lensing can certainly be useful for researchers, it can sometimes raise more questions about what's being observed rather than answers. For example, back in 2013, astronomers used NASA's Hubble Space Telescope to observe two objects that appeared to be perfectly mirrored. According to astronomer Timothy Hamilton of Shawnee State University, who spotted the two objects, "We were really stumped". 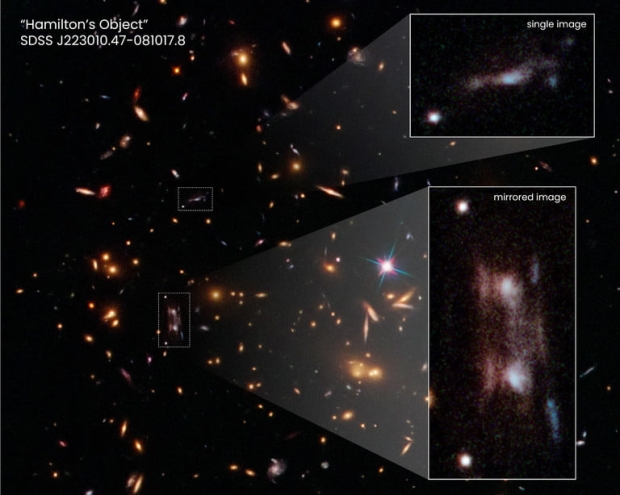 Since that observation, researchers have been studying the mirrored objects and found that there was a large undiscovered galaxy in between Earth and the observed galaxy behind it. The galaxy located between the galaxy further away and Earth was orientated in such a way that it caused this mirroring effect.

Richard Griffiths of the University of Hawaii in Hilo explained, "Think of the rippled surface of a swimming pool on a sunny day, showing patterns of bright light on the bottom of the pool. These bright patterns on the bottom are caused by a similar kind of effect as gravitational lensing. The ripples on the surface act as partial lenses and focus sunlight into bright squiggly patterns on the bottom."

Adding, "We know it's some form of matter, but we have no idea what the constituent particle is. So we don't know how it behaves at all. We just know that it has mass and is subject to gravity. The significance of the limits of size on the clumping or smoothness is that it gives us some clues as to what the particle might be. The smaller the dark matter clumps, the more massive the particles must be."