Samsung's new flagship foldable Galaxy Z Fold 3 smartphone is in the hands of millions across the world, with one user dropping it from a bike -- the phone surviving, but then blowing up when it was being packaged up. Check it out:

The Galaxy Z Fold 3 survived a fall from his bike a week ago, after he visited a Samsung repair center and was told to box it up and mail it in. Once the Galaxy Z Fold 3 was put in the box, it exploded and was thrown in the garage for it to blow smoke out of the battery which now had a hole in it.

Just as @CoachCWC said on Twitter, imagine if this happened during shipping. It was being boxed up to be sent back, what if it did this as it was in the air and on its way to Samsung for repair. Just to be clear, this isn't an article about 'OMG the Galaxy Z Fold 3 exploding is like the Galaxy Note 7 all over again', but this phone was dropped beforehand.

What this is pointing out, is that the battery shouldn't be exploding after it's been dropped... as it would result in a situation where the phone is being sent back and explodes through shipping. Not good.

In a follow-up tweet, @CoachCWC added: "For the record this phone (which I just came back from a Samsung repair center where they said to just mail it in for replacement) fell off my bike a week or so ago. I am sure it had integrity damage which caused this. I don't suspect this is a Note 7 type issue". 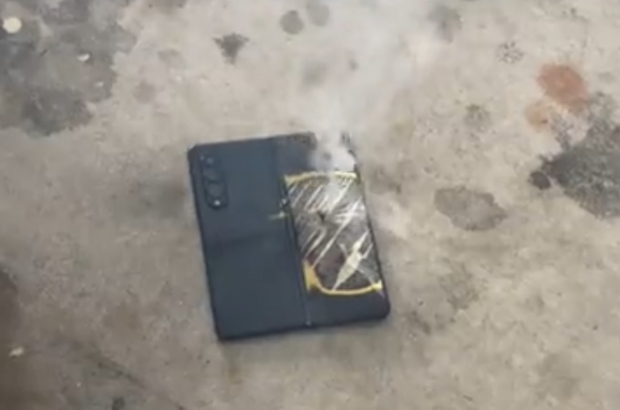