An astronomer has explained why all of the planets in our solar system are roughly sitting on the same orbital plane. 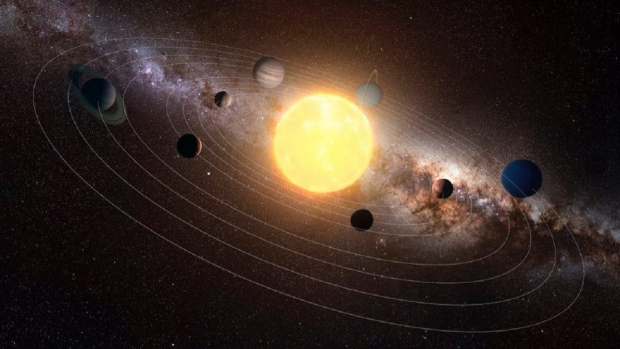 According to Nader Haghighipour, an astronomer at the University of Hawaii who spoke to Live Science, the solar system began around 4.5 billion years ago, and at the time, it would have looked like a large cloud that measured 12,000 astronomical units (AU). An astronomical unit is the distance between Earth and the Sun, which is around 93 million miles. As the cloud of gas and dust increased in size, it began to collapse under its own mass to form a disc.

Live Science uses a fantastic analogy in its article here; "Imagine a pizza maker throwing a spinning slab of dough into the air. As it spins, the dough expands but becomes increasingly thin and flat. That's what happened to the very early solar system." As time went on, the center of the disc began to squeeze together under pressure, which then fused hydrogen and helium atoms, creating what we know today as the Sun. The Sun continued to grow and created space between the flat disc and itself.

As millions and millions of years went by, the disc became flat, which is known as a protoplanetary disc. And all of the particles in this disc orbiting the young star continued to smash into each other, eventually forming the first grains of dust, then pebbles, then rocks, and eventually planets. Looking at the solar system today, the size of planets clearly varies, and so do the compounds that make up those planets. But, despite the size differences in the planets, they have roughly remained on the same orbital plane.