All NewsBusiness, Financial & LegalCases, Cooling & PSUContests & GiveawaysCPU, APU & ChipsetsDealsDisplays & ProjectorsGamingMotherboardsScience, Space & RoboticsStorageVideo CardsVirtual & Augmented Reality
All ReviewsAll ArticlesAudio, Sound & SpeakersCases, Cooling & PSUCPUs, Chipsets & SoCsComputer SystemsDisplays & ProjectorsGamingMotherboardsNetworkingPeripheralsStorageVideo Cards
GuidesGamingAsk the ExpertsNewsletterAboutForums
Windows 11Halo InfiniteBattlefield 2042Elon MuskGTA 6RTX 3080HDMI 2.1Bitcoin Mining
TRENDING NOW: 'Fleet of UFOs' caught on video emerging from dark side of the moon
Continuing on our coverage of X38 boards we visited Biostar, a brand that you might not associate with high-end motherboards. However, Biostar has been working hard trying to up its reputation and the T-series proved that Biostar can compete with performance boards from more well known brands. The company has also made a move into the graphics card business and it looks like they're taking the fight to round two.

The board we were shown was the TX38-A7 Deluxe and it has some similarities with the other X38 boards we've already posted information about. Biostar has managed to get some ex Abit engineers onboard and it looks like they've taken some of their expertise with them and implemented it into this board. 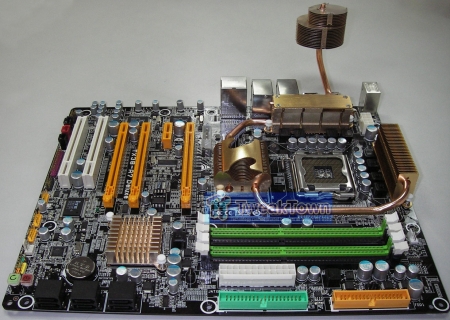 As you can see from the picture above, this board has some rather unusual features. First of all it features heatpipes and although it's not the first board from Biostar to do this, it's the first board to feature an external extension. This is similar to DFI's design, but the external fins are much smaller which should make it easier to install, but it won't dissipate as much heat.

This was still an engineering sample, but the final boards won't differ too much from the one pictured. The board also has three x16 PCI Express slots, although only two of them have the full bandwidth with the third slot having x4 bandwidth. The downside to this design is that Biostar has run out of PCI Express bandwidth for the Ethernet controllers and the board is using dual PCI Gigabit controllers. Not ideal, especially considering that the PCI bus doesn't have enough bandwidth to cater for Gigabit speeds. 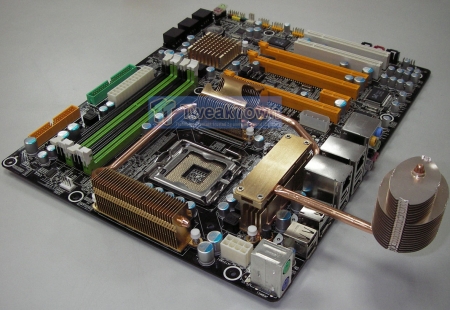 This board should be available around launch time and Biostar told us that it should be one of the most affordable X38 boards out there without compromising on performance or overclocking features. Time will tell.
Newsletter Subscription