Nearly two years after launch, Control is still selling well and Remedy expects 2021 to be a good year for overall purchases. 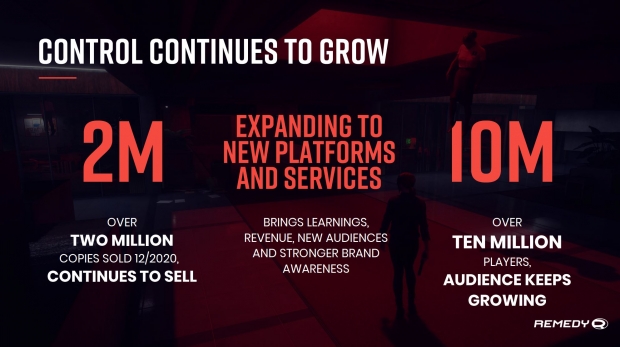 Remedy's new IP is paying off big. The developer's earnings are strong (they made more in 1H 2021 than the entire 2017 year) and Control is a big reason for continued revenues. Control has sold 2 million copies as of December 2020 and has been played by over 10 million people via game sales, PlayStation Plus, and Game Pass. Remedy expects Control to continue selling well into its third year.

"Control sold well in 2020, a long time after its original launch, and Control has continued to sell well this year," Remedy Entertainment CEO Tero Virtala said in a recent earnings call.

Control currently has two mainline release iterations: the original base game on PS4 and Xbox One, and the controversial Control Ultimate Edition on PS4, Xbox One, and PC, which also includes a next-gen upgrade to PS5 and Xbox Series X.