Activision-Blizzard reports the highest Q2 revenues, operating income, and net profit in the last ten years as it faces down scathing abuse and discrimination allegations. 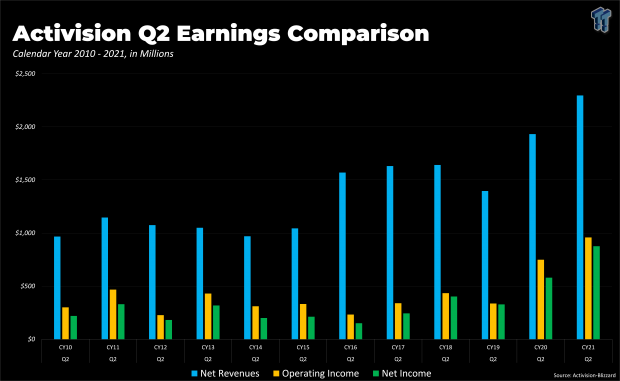 While Blizzard is embroiled in a heated storm of controversy that's led to worker strikes and walk outs, the company broke records with its recent quarterly performance. Q2 2021 had the highest net revenue, operating income, and net income out of any other second quarter period in the last 10 years.

During calendar Q2'21, Activision-Blizzard made $876 million in profit on $2.296 billion in revenues, Income after operating expenses was $959 million, the best for a Q2 period in a decade. The results were driven by strong Call of Duty earnings from Warzone, Black Ops and CoD mobile, significant spikes in King earnings with a record-breaking $635 million in revenues, and continued purchases and recurring subscriptions from World of Warcraft.

Q2 earnings per share hit $1.12, outperforming Activision-Blizzard's expectations by $0.23 and representing a 49% increase over last year.

Despite this outperformance, Activision-Blizzard is is not in an enviable position. It's facing two major lawsuits: one that alleges sexual misconduct, discrimination, and a "frat boy culture," and another that alleges possible securities fraud.

Company shares have dropped to their lowest point in the last 6 months due to the ongoing controversy, and multiple law firms have filed class action securities fraud lawsuits against Activision-Blizzard.