Jeff Bezos and his crew recently took the first crewed trip aboard Blue Origin's New Shepard rocket, but if Bezos and the crew were hoping to get awarded their "astronaut" badge, they will be sorely disappointed. 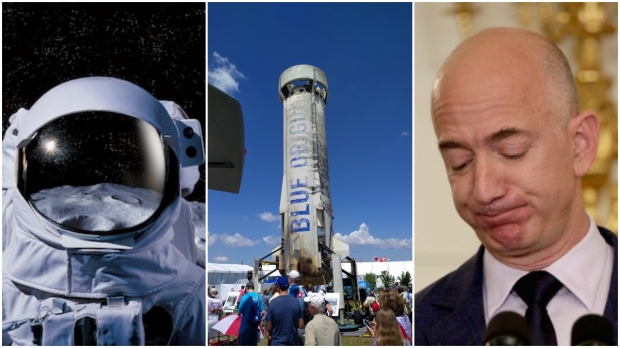 Since the launch of Richard Branson's Virgin Galactic space trip and now Jeff Bezos' Blue Origin launch, there has been public debate over whether or not Branson and Bezos actually went to "space", and if they are astronauts. Branson and his crew reached the 53 mile altitude mark, and Bezos flew 66.5 miles up. For context, the US recognizes space at the 50 mile mark, however, the international altitude for space is 62 miles - known as the Karman Line.

Since Bezos and his crew flew above the Karman Line, does that qualify them to be astronauts? Well, Virigin Galactic pilots who flew the VSS Unity to 53 miles were awarded with "astronaut wings" by the Federal Aviation Administration. However, Bezos and no one from Blue Origin qualified, despite reaching a higher altitude. Why?

The Daily Mail reported, "In order to qualify, they have to make a contribution to the flight and to human space flight safety while travelling beyond the 50 miles mark defined as space by the FAA. With the Blue Origin New Shepard spacecraft controlled entirely from the ground, with no input from the crew on board, the new FAA criteria wasn't met."

The Mail continued, "This could put the entire space tourism industry in doubt, experts predict, as passengers on the various spacecraft wouldn't 'get their wings. It is possible a new category of 'space tourist' or commercial astronaut is created to describe those who go to space purely as a passenger, rather than crew or pilots."

Read more: Elon Musk has a laugh at meme that pays out Jeff Bezos going to space

Read more: Blue Origin will put the youngest and oldest person in space this July