AMD is reportedly going to unleash its new codename Chagall CPU later this year, a new Zen 3-based range of Ryzen Threadripper CPUs with up to 64 cores and 128 threads. 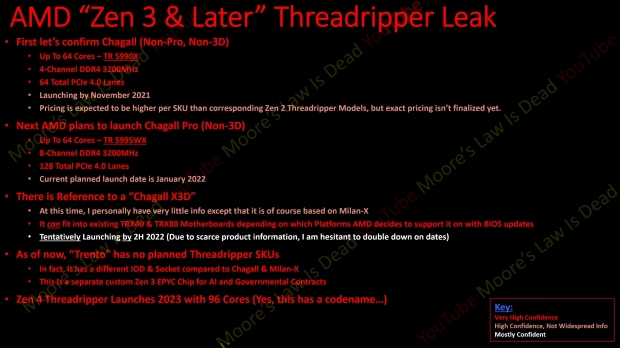 We've been hearing more and more on the new AMD codename Chagall lately, but now Tom from Moore's Law is Dead is providing some more detailed information on the new CPUs. Tom says that the new Chagall CPU will have up to 64 cores with the Ryzen Threadripper 5995X processor, and will launch in November 2021.

As I said in my article above about the "Chagall" CPUs offering up to 64 cores and 128 threads, where I said: "We shouldn't expect too much in the way of differences between the Ryzen Threadripper 5000 series CPUs and the latest flagship Ryzen Threadripper 3995WX -- that'll have to wait until the Zen 4-based Ryzen Threadripper CPUs that will deliver up to a huge 128 cores and 256 threads, as well as 12-channel DDR5 memory support".

You can read more about the next-gen Zen 4-based CPUs with 128 cores and 256 threads with 12-channel DDR5 memory here.