EA has filed a patent for a unique battle pass scheme that covers a lot of permutations, including tiers/hierarchies as well as nonlinear unlocks. 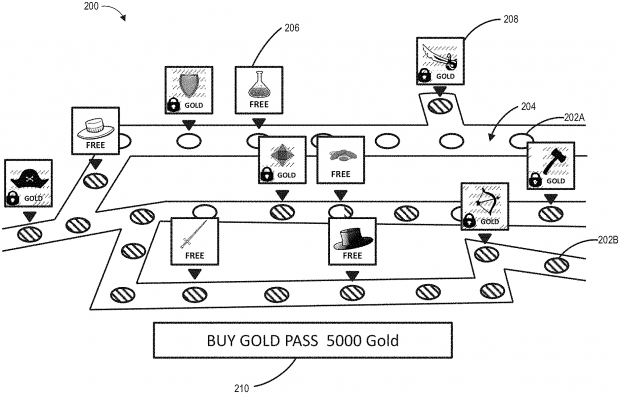 Note: This patent may not ever be used in an actual game. This article is not confirmation that such a battle pass system will show up in an existing or future EA game.

EA latest patent would theoretically let gamers choose their own way across a winding battle pass with different branching paths. The idea is to give players much more variety in how seasonal rewards are unlocked, including both free nodes as well as premium paid unlocks. It's kind of like if a battle pass acted like a skill tree in an RPG. This could be a part of EA's emphasis on new engagement models, which is a big part of the company's new three-part business model.

"The seasonal reward system can provide users with a non-linear map that allows the users to choose how to progress through the reward map when advancing or leveling up a virtual character or user account within the video game," the abstract reads.

"The virtual map can provide a visual representation of a non-linear pathway or tracks that a user can follow based on how the user would like to proceed and what types of rewards the user prefers to unlock. The reward map provides a series of reward nodes connected by links, resulting in a plurality of pathways or tracks that a user can select during advancement within the video game.

"The user can select individual reward nodes when the virtual character levels up and progress along a pathway on the virtual map."

Like any patent, this one covers a ton of different possibilities and combinations. The patent mentions linear unlock schemes as well as multi-tiered ones and branching sections. There's even mention of some unlockables being exclusive to certain character classes.

The patent's priority date (the time it was first filed) is August 2018, so it's not exactly new, and the current iteration was only just published in May 2021.

Below we have a few excerpts from the patent that shed more like on what exactly it covers: 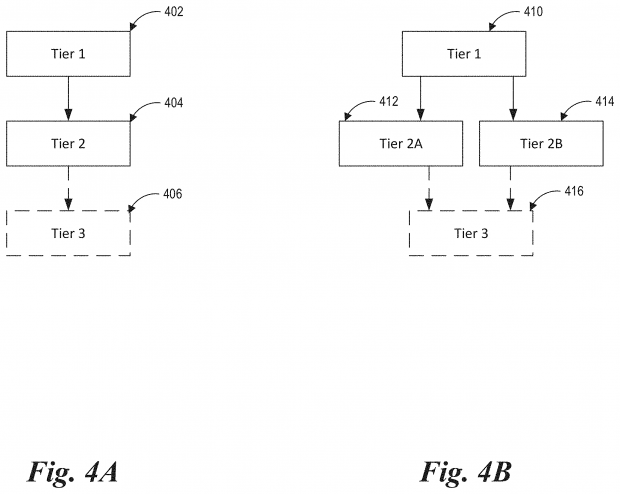 The tiers may be configured so that some categories are not hierarchical and access to virtual rewards in one category does not also provide rewards from other categories, such as illustrated in FIG. 4B.

From the first tier 410, the user may only have a choice to upgrade to Tier 2A or Tier 2B or may be required to upgrade to each tier separately. Tiers 2A and 2B may be mutually exclusive. In some embodiments, the tier structure may combine a hierarchical and mutually exclusive tier structure, where the only means to access the excluded tier is to upgrade to the third tier 416. In some instances, the availability of upgrading to a may be based on characteristics of the user profile or the virtual character within the game. For example, a category may only be available to characters of a certain class, archetype, or faction. 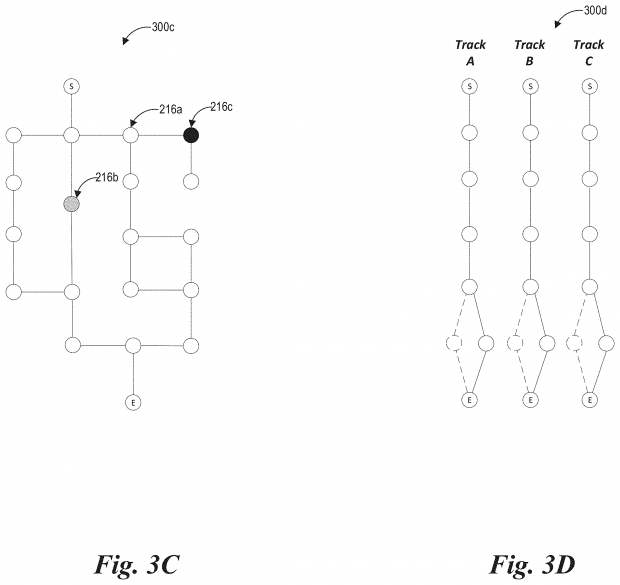 With additional reference to FIG. 3C, the reward map 300 c illustrates an embodiment that includes different types of nodes 216 a-c. The first node type 216 a is a standard node (such as node 202) that accepts advancement currency to unlock.

The third node type 216 c may only be unlockable by users of specific categories (for example, a specific virtual character class within the video game), a different type of advancement currency, and/or other requirements for unlocking the nodes that are different from a basic node 216 a.

The user can select a track and progress through the defined track from the start point to the end point. In some instances, the track may include mutually exclusive choices where the user can only pick one of two or more available nodes. In some embodiments, after the user completes a track, such as Track B, the user may then select a second track to complete, either track A or C. In some embodiments, the user may only pick a subset of the available tracks based on various characteristics associated with the user account and/or based on the video game.

For example, in a game with different factions (e.g., robots v. ninjas), each faction may be associated with a different subset of available tracks for selection by the user. In some embodiments, the user may have use different reward maps with different non-linear advancement tracks. The video game may have any number of tracks.