Taiwan Semiconductor Manufacturing Company (TSMC) are already years ahead of the competition, leaving Intel in its proverbial dust and Samsung not able to catch up until 2030 according to recent reports. 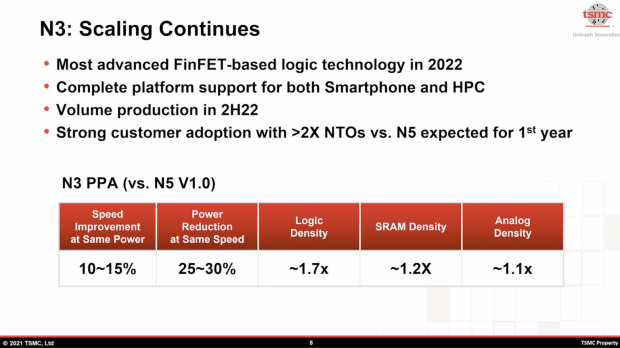 But during TSMC's 2021 Online Technology Symposium which started today, alongside Computex 2021, we found out more details about TSMC's upcoming N6, N5, N4, and N3 process nodes. TSMC provided the world with new details on their defect densities, yields, and production timelines -- as in when you can expect to find these next-gen chips in your favorite products (CPUs, GPUs, game consoles, smartphones).

TSMC's senior vice president of research and development, Dr. Yuh Jier Mii, explained that the 3nm process node will have power consumption and performance improvements over the new 5nm node, which the first-gen N5 chips just went into production.

Dr. Mii noted that TSMC's new 3nm process had had double the tape-outs in its first year compared to N5, with a tape-out being the process in which chip designers finalize their designs (think a GPU, SoC, APU, etc) and then send it to a fab, and then more improvements are made (if necessary) and then it goes into production.

TSMC has said that its upcoming N3 process node will be the "most advanced FinFET-based logic technology in 2022" and that it will have complete platform support for both next-gen smartphones and the future of HPC (high-performance computing).

The company said that volume production of its N3 node will happen sometime in the second half of 2022, so we should expect to see physical rumbles -- products powered by 3nm designs -- sometime in late 2022 or early 2023.