Sonic the Hedgehog turns 30 years old in 2021, and SEGA is holding a special stream to outline the Blue Blur's future.

SEGA plans to hold a special Sonic Central stream on Thursday, May 27 at 9AM PST / 12PM EST. The showcase will be centered around new Sonic games, re-releases, content partnerships, and cross-brand initiatives.

As outlined in SEGA Sammy's recent financials, the Sonic franchise is incredibly important for the company's future in entertainment. SEGA plans to leverage the Sonic IP in a number of ways include cross-media TV shows and movies as well as new games, remasters, re-releases, and sequels.

The Q4 Q&A session also confirms SEGA will prioritize high-quality releases of the Sonic franchise, which is its "representative IP":

"Regarding the evaluation of metacritic, there was a problem with product quality in the game of Sonic in the past, which is our representative IP, and a major reflection was that it recorded an extremely low score and largely betrayed user expectations. Since then, we set a policy of prioritizing the creation of high-quality games that people who purchase our games will enjoy, and not acknowledge to release the products when quality is insufficient just to achieve the plan in the short-term." 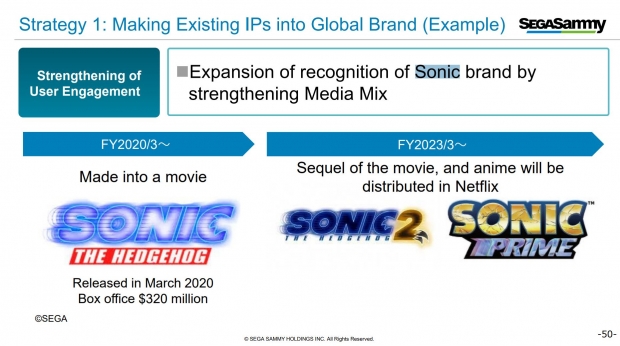