Activision has significantly upwardly revised its 2021 earnings target by $150 million due to high confidence in continued Call of Duty growth, Blizzard game releases, and King content. 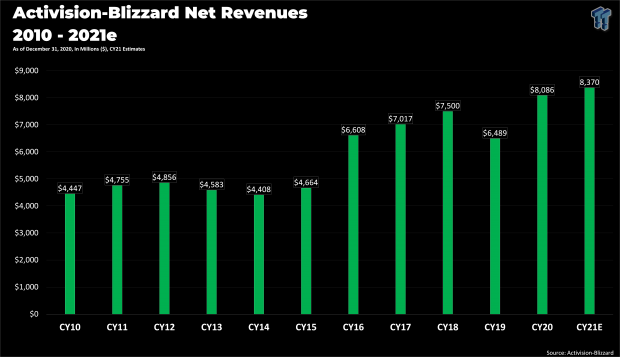 Based on recent earnings reports, Activision now expects to make a new all-time revenue high of $8.37 billion throughout 2021. Activision previously estimated $8.22 billion in revenues, and this marks a $150 million increase. 2021 is expected to beat 2020's record revenues by a staggering $284 million.

Activision says this uptick is driven primarily by Warzone engagement and monetization, Call of Duty premium game sales, and new Blizzard releases like Diablo 2 Resurrected. This year's mainline Call of Duty game, the World War II-based Vanguard from Sledgehammer Games, will be the third major game to integrate directly into Warzone since the F2P game's launch.

It's unknown where exactly Call of Duty's estimated numbers stand in the forecasts. The franchise made an incredible $3 billion in revenues in 2020, roughly 40% of the company's total earnings during the entire year, and contributed over $1 billion in operating income during the year.

"The franchise has never been stronger or more widely played," Activision said in reference to Call of Duty.