Adam Sandler has left an IHOP after a worker asked him to kindly wait for a table as the restaurant was too busy. 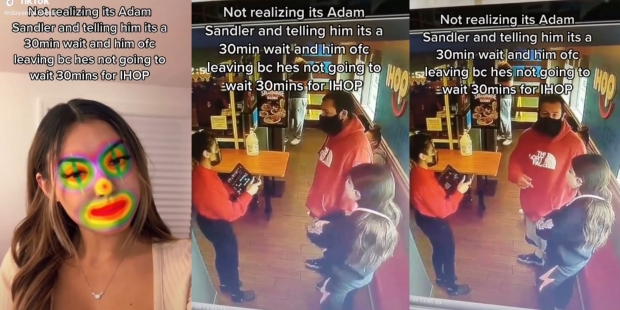 The moments were captured in a now-viral TikTok video that shows the IHOP worker, Dayanna Rodas, showing off the security footage of her unknowingly turning away Sandler. Rodas said that she told Sandler that he would have to wait 30 minutes to get a table, which resulted in him walking out with a young woman believed to be his daughter.

The TikTok has since been viewed more than 8 million times since this last Monday, and many people in the comments have praised Rodas for not giving Sandler special treatment for being a Hollywood movie star. Sandler also received praise from people in the comments for not droppings his celebrity status to skip the queue and for the relaxed attire, he chose to wear. For more information on this story, check out this link here.