Timi, the developer behind mobile's #2 game Honor of Kings, has made more money than Activision, NetEase, EA, and Take-Two Interactive. 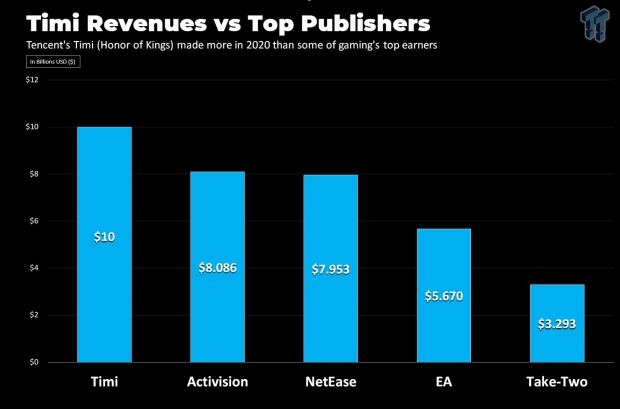 A single Tencent developer has made more money in 2020 that some of gaming's reigning titans. According to a new report from Reuters, Tencent's Timi studio (Call of Duty Mobile, Honor of Kings) has generated $10 billion in revenues in 2020. This eclipses 2020 revenues of heavy-hitting games-makers like Activision ($8 billion), NetEase ($7.9 billion), EA ($5.6 billion) and Take-Two Interactive ($3.2 billion).

Tencent generated a whopping $23.01 billion in yearly revenues, beating out Sony and becoming the industry's top-earning company in games revenues. Timi generated 43% of these earnings. Taking a quick glance at how its games performed gives more context. Honor of Kings pulled in $2.5 billion in earnings worldwide.

"Honour of Kings was the top-grossing mobile game worldwide for the second consecutive year and continued as the most popular mobile game in China by MAU," Tencent notes in its Q4 earnings report.

With Call of Duty Mobile, Activision-Blizzard says Call of Duty mobile made nearly $500 in less than a year, and the mobile game helped boost franchise earnings by 200% and drove segment revenues to $3.9 billion.