PUBG Mobile and its Chinese port have made nearly $3 billion in 2020, topping the worldwide mobile charts. 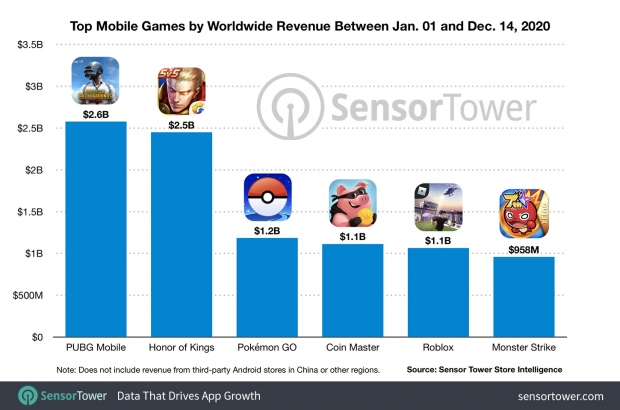 Mobile gaming is big business: In 2020, Newzoo estimated that mobile gaming would generate $77.2 billion and make up 48% of total industry earnings. Monetization was to make up 74% of revenues, or an incredible $117 billion, driven by a combination of free-to-play and premium games.

Now we're seeing the proof in those numbers. According to analyst firm SensorTower, five mobile games have generated over $1 billion in revenues in 2020. Titles like PUBG Mobile, Honor of Kings, Pokemon Go, Coin Master, and Roblox all pulled in more than $1 billion in revenues during the year, which is more than some games publishers make altogether.

PUBG Mobile topped the charts with an incredible $2.6 billion. This is a combination of microtransaction earnings in PUBG Mobile and its Chinese port Game For Peace, the latter of which is immensely popular in the lucrative overseas market.

The number is pretty interesting and stacks up pretty well against other titans available on all platforms. Epic Games, for example, made over $3 billion in operating profits in 2018 on the back of massive Fortnite earnings.