It looks like Lenovo is preparing a new set of graphics cards, with a custom Radeon RX 6800 XT and Radeon RX 6900 XT revealed inside of the 2021 7000P LEGION pre-built gaming PC.

Lenovo shared a video teasing the new LEGION design on Chinese social media site Weibo, with the clip above being of the Lenovo Radeon RX 6800 XT LEGION graphics card. The design itself is pretty much a tweaked version of AMD's own reference Radeon VII graphics card -- the previous-gen Vega 20-based GPU with 16GB of high-speed HBM2 memory.

AMD's own reference Radeon VII graphics card had a slick triple-fan cooler and backplate design that Lenovo liked so much that it seems to have dipped its Radeon RX 6800 XT LEGION and Radeon RX 6900 XT LEGION graphics cards in Radeon VII design and it looks kinda cool -- very chunky, but I'm sure it will also run cool, too. 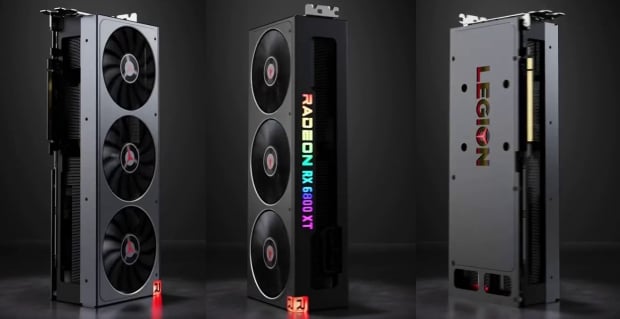 What do you think of Lenovo's new LEGION design?