Bitcoin has been on an unprecedented run recently, with new all-time highs every few days so far in 2021. The excitement will surely wane eventually, but the rocket ship hasn't run out of gas yet on its way to the moon. 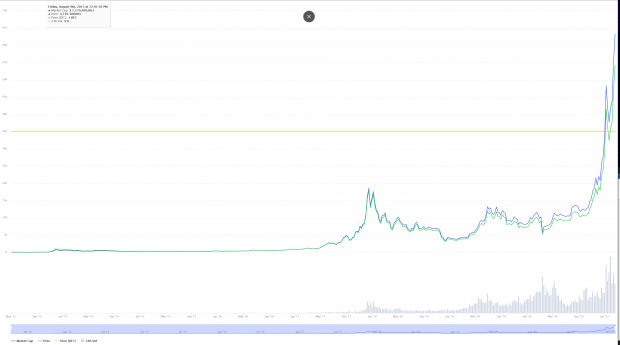 The coin's price is reaching incredible heights, but Bitcoin hit an entirely different and probably more meaningful milestone today. For the first time, the market capitalization (market cap) of Bitcoin has surpassed the $1 trillion mark. Suppose you compare that to the market cap of the biggest companies in the world. In that case, the Bitcoin network is worth more than Johnson & Johnson, Visa, Berkshire Hathaway, Tencent, Facebook and Alibaba. Amazon, Apple, Microsoft, Alphabet and Petro China are the only companies in the world that compare.

Of course, Bitcoin is not a company, so let's take a look at the monetary value of other stores of wealth. Bitcoin is most commonly compared to the gold industry, which has a market cap a touch higher than $10 trillion. In other words, Bitcoin has the equivalent value of 10% of the gold market. The Bitcoin network is almost as big as the silver industry, which carries $1.49 trillion in monetary wealth.

There's no telling where the top is for Bitcoin. We've seen in the past that when the market heats up like this, it's ripe for a correction. When retail money starts flooding in, the price rises rapidly to unsustainable levels. With institutional money rolling in, there could still be room for growth. Don't be surprised if the value comes crashing down to earth soon, though. When Bitcoin corrects, we can see anywhere from a 60% to 90% crash, and it can take years to recover. People who bought at the peak in 2017 had to wait until this year to get their money back.