Epic Games doesn't sleep in its quest for graphics glory, with Unreal Engine revealing its new MetaHuman Creator -- the latest tool in its ever-growing arsenal that creatures super-realistic human characters for games and movies. You'll need to pick your eyeballs back up off the floor after, but check this out:

Unreal Engine's new MetaHuman Creator is a cloud-streamed program that the developer has specifically designed to create digital human characters. After watching the video and having your mind blown, it should also impress you to know that the MetaHuman Creator tool takes less than an hour to create a realistic-looking human... a process that would normally take months.

You can build a new human character from an existing face, or you can create your own and add it to the MetaHuman Creator app. The tool itself will include 30 hairstyles that are powered by Unreal Engine's own strand-based hair and hair cards, with 18 different proportioned body types and a single set of example clothing.

Epic Games takes it to another level is streamlining its motion capture support into the MetaHuman Creator app, where you can export a fully rigged version of your model and then animate it using the iOS-based Unreal Live Link Face app. The developer notes that it is working with other companies to get improved motion capture support, which is something that will be improved upon over time. 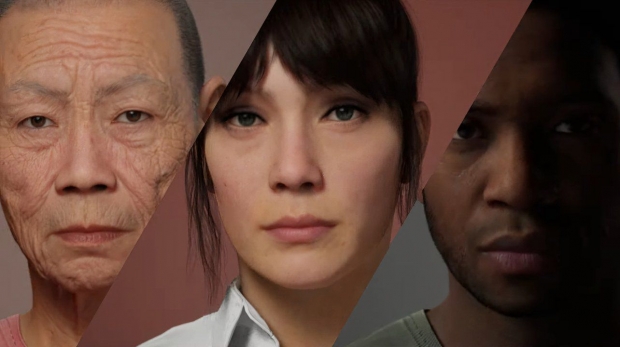 You can even download two finished sample humans that were created with the new MetaHuman Creator app, which are available as a free download on the Epic Games Store. The models can be tweaked in Unreal Engine 42.6.1 projects and up.

I need to see this in the next wave of games, stat -- and now it should be making more sense as to why the next-gen consoles are so powerful and why PC hardware is getting increasingly powerful. Ray tracing is becoming an important thing and needs next-gen technology like this to drive adoption... well, here we go.

Also, why is a game developer doing something like this while visual FX firms make junk like the Mustache-Gate from Justice League with Superman actor Henry Cavill having a ridiculous face for the movie as they CG'd out his mustache that he donned from working on Mission Impossible: Fallout.