Activision earned 57% of its total-year revenues from microtransactions, DLC, and other in-game purchases. 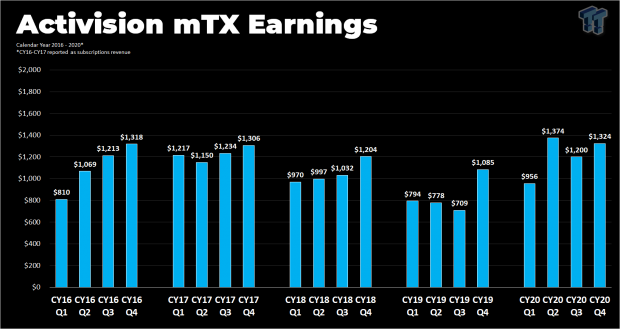 While scouting Activision's total-year 2020 earnings, I noticed something interesting: The company made 57% of its revenues from mTX throughout the year. In 2020, Activision-Blizzard made more money than it ever has before, breaking over $8 billion in revenues. A good chunk of that was from in-game spending.

The financials show Activision earned $4.852 billion from microtransactions throughout 2020, mostly driven by Call of Duty mtX, which was up a mighty 70% year-over-year in Q4. It's also worth noting the company earned 82% of its revenues from digital, which is par for the course.

Remember that Activision-Blizzard doesn't keep all the money it earns. Far from it. The company spent 75% of its earned revenue (a massive $5.3 billion) on expenses, which include marketing, distribution, upkeep/live servers, game development, and everything else. That leaves roughly $2.1 billion in net income earned on the back of over $8 billion in total revenues.

These figures aren't GAAP revenues, though. That means they're not the standardized earnings that Activision reported to investors.

Here's how the company explains non-GAAP figures: "Activision Blizzard's non-GAAP financial measures are not based on a comprehensive set of accounting rules or principles. These non-GAAP measures have limitations in that they do not reflect all of the items associated with the company's results of operations as determined in accordance with GAAP."