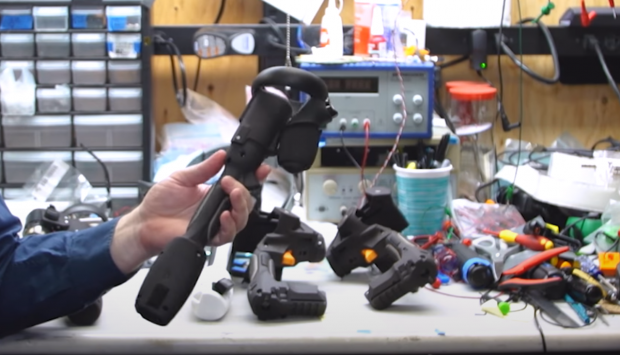 Tactical Haptics' SaberGrip is a cylindrical controller that looks somewhat like the hilt of a sword. The device comes in two models: a single-handed option and a two-handed option. Each controller includes a trigger and a single button for interacting with menus or triggering a weapon or tool. Additionally, each controller features two plates on the handgrip that trigger the shear force sensation.

The SaberGrip controllers utilize shear forces to simulate the sensation of interacting with a handle-based tool or weapon. The controllers feature moveable plates on each side on the handle, which move in opposing directions to simulate the flex and vibration you would feel in your hand while manipulating objects. The shear force plates can replicate a sword's weight in your hand while you swing it through the air, or the kickback you would get when you fire a nail into a board from a nail gun.

Tactical Haptics CEO, Will Provancher, said the controllers could simulate any physics model. If you can calculate a sensation, the controller can interpret the motion and replicate it with the shear force plates.

The Tactical Haptics SaberGrip is not a full-fledged VR controller. It does not include any tracking sensors, but the company gave it a modular design so that you can use it with Oculus and Steam VR headsets. The company created a mount that holds the Rift S and Quest Touch controllers and mounting system for HTC's Vive Tracker pucks. Tactical Haptics is also working on non-VR use cases, such as game console compatibility. The company is working on a fishing reel attachment that would work with fishing games.

The Tactical Haptics SaberGrip is not yet available. The company is currently building partnerships with manufacturers that can help produce the controllers at scale. Provancher estimates that the product would hit the market as a "prosumer" device at roughly the $500 range. Eventually, he hopes to sell the controller for around $150 each, so approximately the same price as Valve's Index controllers.